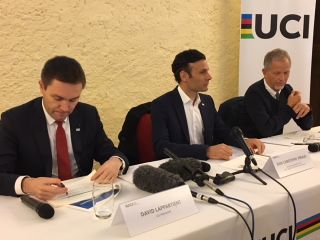 Jean-Christophe Péraud is no longer working for the UCI after his role as leader of the fight against mechanical doping was made redundant last week.

The Frenchman's dismissal was reported by L'Equipe, with the UCI yet to officially confirm it. The French newspaper cites a need to cut costs as a result of the COVID-19 pandemic, with Péraud reportedly informed via "a discreet telephone call" that his employment would end on June 30.

Péraud, who finished runner-up at the 2014 Tour de France, was appointed as 'Manager of Equipment and the Fight against technological fraud' in late 2017, following David Lappartient's victory in the UCI presidential election.

At the 2018 Tour de France, Péraud helped to introduce thermal imaging, X-ray scanning, and bike tagging, on top of the existing tablet scanning technology, to test for hidden motors.

French inquiry into mechanical doping dropped for lack of evidence

The war on mechanical doping was a key part of Lappartient's election manifesto, but the issue has calmed in the intervening years, with a French investigation into mechanical doping dropped last week due to a lack of evidence.

"Yes and no," Péraud told L'Equipe when asked whether he had fulfilled his mission.

"Yes, on a personal level, because I'm aware there's no cheating at the highest level of competition. No, because the UCI has not succeeded in guaranteeing to the general public that this cheating doesn't exist. There's nothing more difficult than proving that something doesn't exist, and there's still a doubt in the mind of the public."

As for whether the credibility of the sport depends on such an investment in a visible campaign against potential motor doping: "It's not up to me to answer that question – it's a political choice."

Péraud retired at the end of 2016 after a career that started out in mountain biking before turning to the road full-time in 2010. He rode for a year at Omega Pharma-Lotto before spending six years at AG2R La Mondiale, where he placed second at the 2014 Tour.

The 43-year-old is now looking to his next step, and is keen to stay in cycling but with a different focus.

"I learned a lot at the UCI but I went to get back into the sporting side of things. I'd like to work on performance optimisation in a cycling team, bringing together all the different elements – athletes, directors, doctors..." he said.

"I don't have any specific training but I can use my own experience; I've always been on the hunt for performance through all possible training methods."