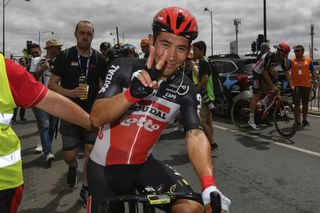 Caleb Ewan (Lotto Soudal) was left with too much to do in the finale of stage 1 at the UAE Tour but despite finishing second to winner and race leader Pascal Ackermann the Australian refused to be downbeat. With at least three more bunch sprints to come, Ewan told Cyclingnews that there were several positives to come out from the opening sprint and that had luck been on his side the result might have been different.

Take nothing away from Ackermann. The German was dominant as soon as he hit the front with less than 150m to go, and despite Ewan's late comeback, the Bora-Hansgrohe rider took a comprehensive win.

"It was a pretty standard stage and went how I expected it," Ewan told Cyclingnews at the finish in Dubai.

Caleb Ewan: As a sprinter you always want to overachieve

Ewan was too far back when the rest of the sprinters were jostling for position and he appeared to make a huge effort in order to draw himself back into content and onto the back of the Mitchelton Scott train in the last few hundred meters. Just as he made contact, the road opened up for Ackermann and the German powered to the line. Ewan was the best of the rest but after being boxed in he paid the price for having to pull himself back into the fold.

"There wasn't much wind out there and everyone was pretty fresh at the end, which makes it a hectic final. It's always so hard to keep control here. It's always easy to ride on the wheel but as soon as you hit the front it's different. It means that you have to gamble a bit and come from behind, and these finishes are so hard to judge.  You need to have a lot of luck as well if you're coming from behind."

"I was a bit boxed in and then I was ahead of Jasper de Buyst. I wanted to wait for him to come by me again and then we both needed to get out. By the time we both did that it was probably a bit too late. He did a really good job to get me back to the front but I was a bit spent by then. Overall the team did a good job and we'll take that confidence into the next stages."

The UAE Tour has been billed by many, including the sprinters here, as one of the strongest line-ups of fast men in some time. Only Elia Viviani is missing from a list of best sprinters in the world right now, meaning that a win at this race carries a huge amount of importance.

"To win here you need to be faultless," Ewan told Cyclingnews.

"You need to have luck and for everything to go right for you. It's hard to see in the sprint where Ackermann came from but we'll analyse it and see where we can improve. We can take positives from here."

Next up for Ewan is stage 2 to Hatta Dam. The Australian won there in 2019, taking his first WorldTour win for Lotto Soudal in the process. Twelve months on and the road to the final climb is tougher, and Ewan is aware that he might not arrive at the foot of the final ascent with quite the same zip in his legs. Still, he won't be throwing in the towel just yet.

"It's going to be tough. The day is going to be lumpy and it's not like last year. So it could suit a more punchy rider but we'll give it a go and see what happens."