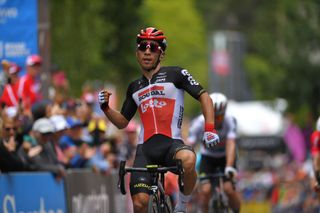 Caleb Ewan wins stage 2 of the 2020 Tour Down Under in Stirling (Image credit: Getty Images Sport)

If the Tour Down Under is any indication, Caleb Ewan might just be the fastest sprinter in the WorldTour in 2020, and the 25-year-old says he only expects to get stronger after a pair of wins on home soil last week.

Ewan etched his name into the annals of Tour de France history with a trio of stage wins in 2019 and, unlike previous Grand Tours, he finished the race including a stage win on the Champs Elysees. He ended his season early after taking a win in the Brussels Classic in early September.

Ewan's move to Lotto Soudal has been fruitful - he won 10 races last year including his five Grand Tour stages - and showed an enormous turn of speed in his stage wins in Tour Down Under - both in his come from nowhere victory in Stirling and his showdown with Sam Bennett (Bora-Hansgrohe) in Murray Bridge.

Lotto Soudal to ride disc brakes only in 2020

"I didn't really know exactly how good my form would be after not racing for a long time and also wanted to ease into the season more than I've done in previous years by making the Tour Down Under my first race of the season," Ewan told Cyclingnews.

"It's great to start winning straight."

In Tour Down Under, Lotto Soudal were up against strong trains from Deceuninck-Quickstep for Bennett and Cofidis for Elia Viviani. Of the four sprint stages, Ewan won two with Bennett and NTT's Giacomo Nizzolo taking the others. It's an admirable strike rate, but Ewan admitted to making a mistake that cost him a potential victory on stage 5.

"It's hard to get every sprint perfect because sprinting is so chaotic and complex and anything can go wrong. We'll make mistakes just as we did on stage 5, when I moved off Roger's wheel and he still led out the sprint, but we need to learn from them and make it better for next time.

"But there's a sense that everything is a going well and I won two sprints. I feel really good, happy with my sprinting and with my riding."

Ewan will head to the Cadel Evans Great Ocean Road Race before leaving home for an ambitious season, hitting the UAE Tour and Paris-Nice before his first major goal, Milan-San Remo.

"You always come into the season with certain goals. I think they're similar to last year but as a sprinter you always want to overachieve," Ewan said. "We'll see, I'll try to do better than last year, which means winning more and winning at the Tour de France again."

It's hard to top three Tour de France stage wins, but Ewan says he is on an upward trajectory.

"I'm still only 25 and I only finished my first Grand Tour last year. I think that has helped me up to another level and I expect to get stronger and stronger."