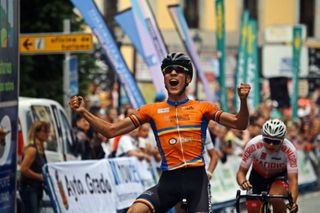 UAE Team Emirates have signed 17-year-old Spanish junior champion Juan Ayuso to a five-year contract. The Alicante native is in his final season as a junior rider and he is set to spend the first year of his contract in 2021 riding for a development team before stepping up to WorldTour racing full-time.

"The idea is for him to make a gradual transition into the World Tour team,” said UAE Team Emirates manager Joxean Matxin Fernandez. "We are deciding along with Juan and his family where is best for him to spend his first year - whether it be at a Continental or professional level is still to be defined.

"He came to our team training camp last winter and he has raced on a bike given by the team this year, so we have been giving him a hand alone the way. Last year he had an exceptionally strong season as a junior and he showed that again at the start of this year."

Ayuso has been on the UAE Team Emirates radar since the middle of last season and he had already won six races so far in 2020 before the COVID-19 pandemic brought racing to a halt in March. The 17-year-old is a strong climber but showed his versatility by placing third in the junior time trial at the Spanish championships in 2019.

"At the moment I’m an all-rounder but I think in the future I will head towards being more a climber," Ayuso said in a statement released by the team. "My first contact with the team was through Matxin mid-way through last season, then I got to know the team a bit better at their training camp last winter.

"At the training camp I had the opportunity to see how the team actually worked. I was really impressed on how well the team was structured and the great atmosphere between the riders. The decision of choosing UAE ahead of any other team is because the team’s mentality is very similar to mine; a very ambitious mentality with a very hard work ethic behind it."

The addition of Ayuso is in line with recruitment policy that appears increasingly aimed at the long-term – even if Pogacar placed on the podium of the Vuelta a España in his debut season in 2019 and is in line to make his Tour de France debut this year, if the race goes ahead.

"The idea is to give him time and space to develop as a rider and as a person," Joxean Matxin Fernandez said of Ayuso. "The priority at the moment is that he enjoys the bike. It’s a five year outlook with Juan and he is part of the long-term project we are building at UAE Team Emirates."