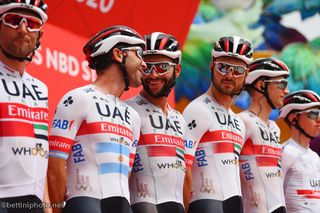 In the early days of the coronavirus pandemic, a study from China concluded that severe illness from Covid-19 hit mostly elderly people or those with health conditions, but a UAE Team Emirates physiotherapist who survived nine days in intensive care with severe pneumonia because of the virus gave both a message of warning not to underestimate the disease and encouragement to keep fighting if struck down by it.

"I beat the coronavirus and I tell you: resist and don't underestimate it," Dario Marini, an osteopath who was working with the team at the UAE Tour, said in a private Instagram post, according to Arezzo Notizie.

The 38-year-old triathlete - strong, fit and healthy - had no concerns when he arrived for the race, but said he first started to experience symptoms on February 26 - the day before the race was called off after stage 5, awarding Adam Yates the final victory.

That's when Marini was tested for SARS-CoV-2, the virus that caused the world to come to a screeching halt as it overwhelmed medical services and caused tens of thousands of deaths worldwide.

Those early studies from China said the majority of cases had mild or no symptoms and only 0.2 per cent of people in his age group seemed to die from Covid-19. Fernando Gaviria and his lead-out man Max Richeze also tested positive for the virus but returned to their home countries last week and said they were in good health.

"Initially everything seemed to be under control. But on February 29 the team doctor explained to us that a colleague and I were going to have to go to the hospital. After that the situation worsened," he said.

The two were moved to the prestigious Cleveland hospital in Abu Dhabi where Marini first began to suffer from pneumonia in one lung, then the other. His fever spiked, he was put on supplemental oxygen, antibiotics, antivirals - all of the experimental treatments for the disease.

Still in the intensive care unit, he managed to remain stable enough on oxygen to avoid being intubated for breathing support.

"Three times a day they gave antibiotics and then a mix of antivirals for Ebola and HIV, then anti-arthritics. For coronavirus there is no cure and the doctors followed step by step the evolution of the situation internationally. They evaluated from time to time, also based on the results found by doctors who worked in other geographical areas, whether or not to change the mix."

The hospital also tested him daily for the virus and, after 19 days, Marini was negative for the virus but pneumonia remained. He stayed in the hospital for another few days before he was finally allowed to return to Italy. But by then, the situation in the world had deteriorated and travel was not simple.

"It took two days of travel because in the meantime, given the medical emergency, many flights had been cancelled. But in the end, I returned. I thank my team, who assured me of the best possible care, and the virologist who followed me, Fernanda Bonilla."

Marini will remain in home quarantine until April 3 and then will hopefully be immune to further infection. Scientists still do not know if there is lasting immunity for those who recover and if so, how long it might last.

He says he has lost a lot of weight and is still debilitated, but is trying to exercise and recover. The mental wounds will take longer to heal.

"My body is healed, but in my mind, I relive the experience of contagion: I continue to disinfect everything, I worry about my wife. I know it will take time, but it will pass."

The 38-year-old told his story, he said, in the hope it "can give comfort and strength to those who read it".

"Do not underestimate the coronavirus, I am 38 years old and I got seriously ill while enjoying excellent health and having an athletic physique. For those who are in isolation, quarantine or simply anxious, I say don't get down and hang in there. And above all, follow all the instructions given to us: stay at home, use masks and gloves, respect distances. This is how you can defeat the virus."