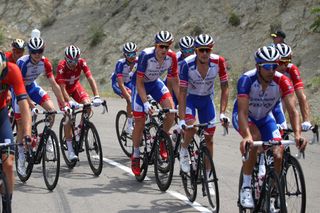 The Groupama-FDJ team ride on the front of the peloton (Image credit: Getty Images Sport)

The Groupama-FDJ team have revealed that two of their riders were discovered to have recovered from the COVID-19 coronavirus during pre-training camp antibody tests.

The riders have not been named for privacy reasons but have been issued a certificate by the UCI, exempting them from the series of pre-race RT-PCR swab tests needed by riders and teams to show they do not have COVID-19. The two riders are now considered immune from catching COVID-19, having been deemed as fully recovered and passed a more stringent heath check.

"At the end of June, we did a serological test to find out who in the team had contact with the virus during the pandemic. We had two cases of asymptomatic riders, who were infected without showing symptoms," experienced team doctor Jacky Maillot told L'Equipe.

"The UCI has given them an immunity passport, with no obligation to repeat the (RT-PCR) virological tests this year. Of course, they were obliged to do cardiological tests to verify that they had completely eliminated the virus because viral myocarditis can cause heart rhythm disturbances or even sudden death."

It is not known if riders from other teams have also been issued exemptions from pre-race COVID-19 testing.

Arnaud Demare and David Gaudu will lead the French team at the Vuelta a Burgos, which starts in Spain on Tuesday, while Thibaut Pinot will return at the La Route d'Occitanie, which starts on Saturday, while a third team lead by Stefan Küng will ride Strade Bianche in Italy. Groupama-FDJ have a roster of 28 riders and can also bring in some of the riders from their development team as stagiaire riders.

Maillot explained that that the French WorldTour team will carry out close to 500 mandatory RT-PCR swab tests on its riders and staff to respect the UCI COVID-19 regulations and so help create the protective bubble around the team at races. It will cost the team around €130,000. All major teams have to follow the same rules, with six other WorldTour teams reportedly opted to use a saliva-based test, with the kits sent to riders homes and then to a central laboratory in Denmark.

"C'est une sacrée gymnastique logistique – It's a hell of a logistical challenge," Maillot admitted. But nobody has apparently complained.

"Quite the contrary. Five tests a month aren’t too bad. They know that they have to accept if they want to race, and they really want to race!"

Riders also have to complete a daily health questionnaire via an app and respect the use of social distancing, face masks and other special rules designed to massively reduce the risk of contagion at races. Groupama-FDJ will take extra precautions during the Tour de France in September.

"We are going to do what we did last year with very satisfactory results: disinfection of rooms, dining rooms, the bus and air conditioning, using aerosol, a hydro-alcoholic solution, done by a company that specialises in hygiene," Maillot explained.

"It can be stressful for some people because in a peloton you always have somebody who is coughing. But if everyone respects the screening rules..."

Team doctors and experts believe it will be impossible to avoid some cases of COVID-19 during the rescheduled racing season due to the sheer numbers of riders and staff in the protected bubbles and the risks they face when at home between races. Other sports have managed to play on despite a number cases in teams but professional cycling's bubble is much larger and constantly moving across borders between countries with different COVID-19 infection rates and government rules.

"There's no such thing as zero risk; that's impossible. Science and mathematics are two very different things. We've got to be prudent and protective and so tests can help that. But it adds another complication to it all," a team doctor recently told Cyclingnews.

"It's giving the team doctors and team managers some sleepless nights but we're all trying to do what we can to ensure everyone is safe and the races can go on."

The UCI has accepted it will take responsibility for any final decision if a rider tests positive for COVID-19 during a race, with teams apparently told of the specific strategy for each race two weeks before the start. A steering group of riders, teams and the race organiser will be set up and report to the UCI, which will decide on a final course of action.

However, details of possible response scenarios remain unclear, with regulations in each country and each specific case possibly sparking different decisions. Maillot suggests that a race might not be stopped if a rider tests positive for COVID-19.

"Not necessarily at first. But, of course, if a whole team is affected, I think the COVID doctor will take action after consulting the UCI," he said.

"For the moment we don't have precise information on the management of a positive case. If this situation arises, the 'contact cases' (those in the environment close to the infected person) would have to be collected quickly because we cannot block an entire team, otherwise we will have no one left at the end of the big Tours... To carry out the tests more quickly, we requested the presence of a laboratory testing truck from (Tour de France organiser) ASO."