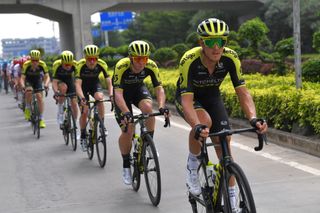 With three stages down and three third places along the way, the Tour of Guangxi hasn't gone exactly to plan for Matteo Trentin (Mitchelton-Scott) so far. The Italian's latest podium place came in Nanning, where he was outpaced to the line by Pascal Ackermann (Bora-Hansgrohe), who took his 12th win of 2019.

Trentin has racked up six victories this season, but even with just a handful of race days left before he clocks off for the winter, the Italian is still hungry to add to his total.

"I don't know. If I can have another win or two, why not? I wouldn't mind," he told Cyclingnews at the finish of stage 3 when asked about his chances of victory on the remaining stages of WorldTour closer.

"For now, it's going pretty ok. Of course, we're here for winning, not for finishing third. It's quite frustrating when you get close but then the win doesn't really come."

Trentin has been a regular visitor to the podium in 2019, racking up 21 top three places along the way – including a Tour de France stage win, but also that painful silver medal at the Road World Championships in Yorkshire.

It's a figure that few in the sport can match, save for a select few of the other fastest men in the peloton, with an impressive consistency on show from February through to October.

Still, Trentin had a good chance to add to his win tally in Nanning, with a hill 5km from the finish perhaps suiting him more than his sprint rivals. But despite Mitchelton-Scott working hard for much of the day, Ackermann made it over the top and simply had too much pace in a head-to-head final straight duel with the Italian.

"It was tough, but it wasn't enough to drop the proper sprinters," said Trentin. "I think we did a good job. I got a nice lead out from Edmondson but just lack the speed against Ackermann. Riabushenko took second but he was on his wheel.

"Ackermann proved to be the quickest even if he didn't win the first two stages. It's like that, and I'm always there, but it would be better to be on the top spot rather than three times in third. But it's ok."

Stages 5 and 6 of the race represent the final chances for Trentin to end the year on a high, and also to end his tenure with the Australian squad with a win.

The 30-year-old is departing for pastures new at CCC Team next season, and only had good things to say about his soon-to-be former team.

"It has been nice. The group is really nice and the team also. I have a really good relationship with the whole bunch – the guys, the staff. It was a really nice two years."

He wouldn't be drawn on plans for next season, which will see him form a potentially deadly classics duo with Greg Van Avermaet, though. Trentin's mind is still on the remainder of 2019, still focussed on tasting victory at least once more before the year is out.

"I still don't think about next year. There are still three stages to go – tomorrow is not for me, but the day after I won last year, so we'll see. Then there will be plenty of time to think about the future in the next month."