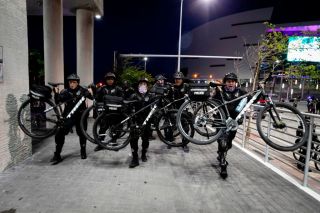 Police officers use their bicycles to control the crowd during a demonstration, in response to the recent death of George Floyd in police custody in Minneapolis, in Miami, Florida, on May 31, 2020 (Image credit: EVA MARIE UZCATEGUI/AFP via Getty Images)

Trek has issued a statement on its "commitment to a better future" after its bicycles were used as weapons by US police officers against protesters during the Black Lives Matter marches across the US. Trek is one of a number of suppliers of bikes to police forces in the US.

Various images and videos of police officers using their bikes as weapons and shields – seemingly having been trained to use them as such – have appeared online and in the media over the past week and a half.

Trek has been under pressure to react to the use of their police bikes. Cyclingnews understands that members of their own Advocates programme have called for action and support for the Black Lives Matter movement.

In a statement published on Cyclingtips but not on their website with their list of initiatives, Trek said it had seen the photos and video of Trek bikes being "used by police in ways that are abhorrent and vastly different from their intended use".

Last week, Fuji Bikes announced that it was suspending the sale of bikes to police due to the evidence of their misuse. Trek did not say it would halt sales of bikes to police forces, with two models still showing as available on their website.

Katie Compton: It's sad that police have used bikes as weapons in protests

Grégory Baugé on racism in pro cycling: You suffer alone

"Recently we have seen photos and video of Trek bikes that have been used by police in ways that are abhorrent and vastly different from their intended use," the statement read.

"For over 25 years, we have seen police on bikes, out of cruisers and offices, building relationships in the neighborhoods they serve. The past two weeks has turned the view of police on bikes from a community asset to a liability.

"A positive outcome of the recent protests is that we are starting to see real police reform being discussed at local and national levels. We believe bikes can play a positive role by continuing to get officers out of cars and armored trucks and into the community where trust can be built."

In the public statement title 'All in' on its website, Trek said it recognized it can do much more to work towards racial equity and announced a number of initiatives and funding to create more cycling industry jobs for people of colour, bring bikes, jobs, and stores to underserved communities, create a more inclusive culture at Trek and work on creating a more diverse future for competitive cycling.

"We are dedicated to learning, changing, and taking action—and this begins with committing to a plan to address systemic racism. We believe Black lives matter and that Black, African American, and other people of color throughout this country do not have the same opportunities that white people have," the Trek statement read.

The company also said it would invest $5 million over the next three years to establish new bike shops in underserved neighborhoods with the goal of building 50 stores in ten years using our DreamBikes model and lessons. It would also establish a $1 million Community Investment Fund for entrepreneurs of colour and existing Trek retailers to open shops in underserved neighborhoods.

"We will invest in those who share our vision of a more diverse future and seek to enhance their local communities. Those interested are encouraged to contact us at Community@trekbikes.com," Trek wrote.

"This training will make Trek a more welcoming environment for people of color and ensure that we hire a more diverse workforce," the statement said.

Trek owns the Trek-Segafredo men's and women's WorldTour teams but admitted that "the lack of diversity in professional cycling is in part due to a development system that lacks people of color."

It promised to establish a scholarship fund to equip 25 NICA (National Interscholastic Cycling Association) teams of children from diverse ethnic backgrounds for the next 10 years.

"The kids that are competing today in NICA are the future of professional cycling. Schools and organizations will have the opportunity to apply for this scholarship through NICA beginning this year."

In conclusion, Trek said: "This is a long road and every journey begins somewhere. We have a history of doing the right thing, taking on the hard work, and producing meaningful results. Together, we can make a world of difference."

These funds are set up to help protesters, the families of victims, and black businesses and charities around the United States and internationally. If you're able, consider setting up a recurring donation to one of the organizations below, to help provide sustained support beyond this moment.

Campaign Zero - Launched by Black Lives Matter activists, Campaign Zero is a national organization that works with law-makers at every level to end police brutality and systemic racism through thoroughly researched policy solutions.

Reclaim the Block - Founded in 2015, this group organizes the local Minneapolis community and city council to redirect funding away from the police department and into other initiatives that promote health and safety.

The Marshall Project - Nonprofit journalism "that seeks to create and sustain a sense of national urgency about the U.S. criminal justice system."

NAACP Legal Defense and Education Fund - This is one of America's biggest legal organizations fighting for racial justice. Much of their efforts are focused on litigation, education, and advocacy.

Bail funds - An organized list of places to donate if you wish to contribute to bail funds going to arrested protesters in Minneapolis, Atlanta, New York, and many other cities. ActBlue will allow you to easily split a donation to many funds, but keep in mind the organization takes its own transaction fee.

Coming to terms with the events of this past week isn't easy. The violence and anger is, at times, almost incomprehensible. As we all struggle to cope and understand how we can make a difference, we've found some videos, books, and articles to be helpful. We've sought to include a mix of educational materials that provide context and expand understanding.

For our white friends desiring to be allies - Courtney Ariel's article is a great outline for white people who want to help lift up others without inadvertently making the conversation about them.

Anti-Racism Resources for White People - An exhaustive list of anti-racism media including movies to watch, essays to read, and people to follow to further educate yourself.

The Case for Reparations - A deeply reported article by Ta-Nehisi Coates that uses personal stories to explain the damage caused by centuries of racist government policy.

What does the demand to "defund police" mean? What about "prison abolition?"

You probably won't hear mainstream politicians discussing these ideas, but you may see them on protest signs. If these demands are new to you, abolitionist @jaybeware briefly explains them in a Twitter thread which provides links to books and essays that expand on the topics. Also see the book 'Are Prisons Obsolete?' by Angela Davis.

If you plan to join a physical protest, here are some useful links to make sure you have everything you need to stay safe. What to bring to a peaceful protest - Vice's guide on what to take with you to a protest.

Protect your protest - An in-depth plan for keeping yourself and others safe during a protest.

How to Cop-Proof Your Phone Before Heading to a Protest - Gizmodo's how-to on protecting your phone data.

ACLU Know your rights - Everything you need to know about your rights as a protestor and what to do if you're detained by the police.