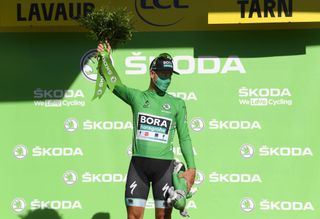 Peter Sagan back in the green jersey despite mechanical during stage 7 sprint at the Tour de France (Image credit: Getty Images Sport)

Untimely mechanicals struck Peter Sagan (Bora-Hansgrohe) and Julian Alaphilippe (Deceuninck-QuickStep) during the final sprint of a wind-swept stage 7 at the Tour de France. Although both were disappointed not to have placed higher on the day, they expressed relief that their respective mishaps didn't cause a crash in the dash to the line won by Wout van Aert (Jumbo-Visma).

"It was a mechanical problem, yes, but that wasn't the whole story," said Sagan, who finished 13th but took back the green jersey after collecting points mid-stage. "I was behind Van Aert, but then I got out of position, and everybody went left, I tried not to fall, but I collided with someone, I don't know who, and my chain came off. I'm lucky not to have crashed. After that, it was impossible to get to the front."

Alaphilippe started his sprint early and looked to be in contention for a high placing when his foot unclipped from his pedal mid-sprint. He lost his balance, sat down in his saddle to avoid falling, and raised his arm in the air in a gesture of frustration. At the same time, Van Aert, Edvald Boasson Hagen (NTT Pro Cycling) and Bryan Coquard (B&B Hotels Vital Concept) went on to secure their respective podium places.

"I was really well positioned for the sprint, but I unclipped and so couldn't do the sprint properly," said Alaphilippe, who finished just ahead of Sagan in 12th place. "It was not a great day for us because we lost most of the team in the split. It was full gas right from the start, from kilometre zero, we didn't have time to think."

Bora-Hansgrohe came into the stage with a plan to set a fast-tempo over the day's opening third category climb of the Cote de Luzencon. Their plan served its purpose in eliminating overnight green jersey leader Sam Bennett (Deceuninck-QuickStep) from the main field along with other sprinters like Caleb Ewan (Lotto Soudal).

The German team continued to keep the speeds high and the gap between Bennett's group and the front of the main field grew to minutes. Sagan took second in the intermediate sprint for points with 55km to go, behind Matteo Trentin (CCC Team), and gained back the points he needed to move back into the green jersey ahead of Bennett.

A cross-tailwind tore through the peloton as they made a decisive turn with 35km to go that saw the main field split with overall leader Adam Yates (Mitchelton-Scott), several of the other main GC favourites such as defending champion Egan Bernal (Ineos Grenadiers), Thibaut Pinot (Groupama-FDJ), Guillaume Martin (Cofidis) and Nairo Quintana (Arkea Samsic), along with Sagan and Alaphilippe in the front group. Also in the front group were Jumbo-Visma with Van Aert and their overall leaders Primož Roglič and Tom Dumoulin.

Several GC contenders, such as Tadej Pogačar (UAE Team Emirates), Mikel Landa (Bahrain McLaren), and Trek-Segafredo's Richie Porte and Bauke Mollema, were caught out in the crosswinds, as were all of Alaphilippe's teammates. The final came down to the few sprinters vying for the stage win and the remaining GC teams protecting their overall classification positions.

Groupama-FDJ led into the final kilometre with NTT Pro Cycling taking over for Edvald Boasson Hagen, who started his sprint with Alaphilippe and Jasper Stuyven (Trek-Segafredo) pulling up alongside him. Alaphilippe unclipped from a pedal while Sagan, several wheels back, dropped his chain. Van Aert sprinted around Boasson Hagen on the right to take the win, and Bryan Coquard (B&B Hotels-Vital Concept) came around on the left but couldn't close the gap and finished third.

"I'm disappointed because we controlled all the race today and everything seem like it was very good, but in the end, I had bad luck in the final, and my chain dropped off," Sagan said. "I missed a lot of points today, but that's cycling. I'm very proud of all the guys because they did a very nice job; they pulled hard from the start until the crosswinds. In the end, we were in the front with Emanuel Buchmann, and everything was really nice … and that's fucking cycling."

Despite the untimely mechanical and not taking the stage win, Sagan complimented his teammates on executing their plan to make the race hard, distance some of their rival sprinters, and take back the green jersey.

"We did a similar stage in 2013, which I won," he said. "We pulled the race all day, to get rid of sprinters, and that day I went and won. This time, it was similar but without the win. I'm happy with my teammates because they did an extraordinary job. We decided together to do it. At first, the director didn't really agree, but the race went very well, and even the directors were happy in the end. I was unlucky in the sprint because my chain got blocked."

Sagan said Bora-Hansgrohe would continue to hunt points for the green jersey, particularly taking opportunities, such as on stage 7, when they present themselves on somewhat unexpectedly challenging stages.

"This is how you win the green jersey, yes, but not like today [due to a mechanical]," Sagan said. "Again, I just have to say thanks to all my teammates because they were amazing today."