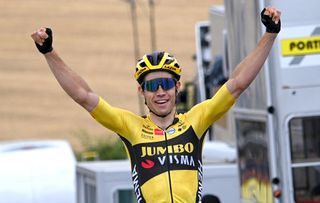 "I think it was mainly confirmation that they weren't playing hide-and-seek [at the recent Critérium du Dauphiné], and just weren't in great shape," Van Aert said on Thursday, according to Het Nieuwsblad.

The 25-year-old – who will be part of Jumbo-Visma's eight-rider squad for the Tour – added that the surprise inclusion of 2019 Giro d'Italia champion Richard Carapaz, who was brought in to the Ineos Tour team despite having originally targeted a Giro defence in October, nevertheless gives the British WorldTour team plenty of firepower.

"They're still sending a strong team to the Tour," he said. "Carapaz may have followed a bit of a strange build-up to the race, but his stage victory at the Tour de Pologne showed that there was nothing wrong with that."

Jumbo-Visma will, however, have to do without the strength of Steven Kruijswijk, who finished third overall at last year's Tour, and who was set to start the rescheduled race in Nice on August 29 as one of three leaders at the Dutch WorldTour outfit, alongside Primoz Roglic and Tom Dumoulin.

The team announced on Thursday that Kruijwijk has a fractured shoulder as a result of crashing on stage 4 of last week's Dauphiné, and will be replaced by Norway's Amund Grondahl Jansen.

"We seem to have the upper hand on paper," Van Aert added. "But it's not going to change anything, or very little, about the course the Tour takes. The route is so tough that it will soon become clear in whose hands the Tour lies, and which team will have to take responsibility. But I can't deny that we're currently looking in good shape."