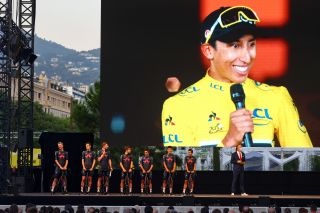 Ineos Grenadiers leader Egan Bernal has admitted that he his still feeling the effects of the back injury that took him out of the Critérium du Dauphiné last month.

The defending Tour de France champion heads into Saturday’s Grand Départ as one of the main race favourites but with Jumbo-Visma flying in recent weeks, the Colombian rider is still working his way towards his best form.

"As for my health, I believe I'm much better. I still have a bit of pain in my back, but the truth is it's much better compared to the Dauphiné, so I'm hoping it gets better as the Tour goes on," Bernal said on Friday during his team's pre-race press conference.

"I still have a bit of pain in the back to be honest, but I'm much better than I was in the Dauphiné. In the Dauphiné the pain was really bad, but in these days I'm getting better, I'm feeling better and I hope during the whole Tour to still work hard on the back, trying to recover, especially for the last week."

Bernal left the Dauphiné with two stages remaining and sat in seventh overall at the time. He struggled to match the best riders in the race and had no answer when Primož Roglič, his main rival for the Tour this year, repeatedly attacked over the first three days.

Roglič would eventually leave the race after a crash but the Dauphiné highlighted the impressive form Jumbo-Visma have reached in the last few weeks, while Ineos Grenadiers have looked off the pace as a collective. On stage 3 of the race, when they looked to put their rivals under pressure, Bernal eventually lost time.

"I think they are a really strong team," Bernal said of Jumbo-Visma, who also come into the Tour de France with 2017 Giro d'Italia winner Tom Dumoulin among their ranks.

"That's something good for the race – to have another really, really strong team to fight for GC. It's also good for us, for Ineos, because we can share the responsibility. It's not just Ineos, for sure they will need to take some responsibility after what we saw in the past races. It will be good to fight for the GC with them."

A change in personnel but not culture

It's not just Ineos' place as race favourites that looks different this year. Their line-up doesn't include Chris Froome and Geraint Thomas, who were both left at home due to a lack of form, and condition. Instead, Richard Carapaz has been drafted in, while new recruit Andrey Amador makes his Grand Tour debut for the squad. The team also goes into the race without Nicolas Portal in the director's seat. The Frenchman tragically died earlier this year and he played an instrumental role in the team's success over the years.

As for the make-up of the squad, Bernal acknowledged the changes in roster but emphasized that despite the alterations, the ethos and culture within the team would remain the same.

"The strategy, that could change, or it could not, but it doesn't depend so much on the language most riders speak; it depends on the race situation and the type of riders who are leading the team.

"It's clear that before, with Froome, Thomas or Wiggins, they were more rouleur-style riders, who gain time in the time trials, whereas with me in this Tour, I'd normally be limiting my losses to my rivals in the time trial. So maybe things could change in that respect, but it's still an English team and the mentality remains the same."

Bernal comes into the race with mounting expectations, not least from back home in Colombia after he became his nation's first Tour winner last year. He dealt with pressure last year and remains focused on taking the Tour one day at a time, but with some many rivals in top shape the 23-year-old is well aware that every stage counts and that between Nice and Paris there can be no mistakes.

"It's a route that can suit us well, but equally, the Tour de France is never easy. It's a very hard route, a very complete route, with a bit of everything – high mountains, stages with wind, and that final time trial which we'll maybe need to get to with a bit of time in hand.

"I'm hoping to do as well as possible. Right now we have to be focused, we have 21 days ahead of us where we need to be on top of our game. I hope to do things in the best way, for the team, for our country, and for everyone out there who needs this – something of a distraction. I'm hoping this Tour can be something for them."