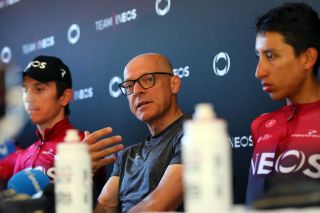 Team Ineos have taken a different approach to targeting the 2020 Tour de France, insisting they will "build on purpose" with a good game plan for the Tour de France with Egan Bernal as leader and Richard Carapaz as a possible second option, while Geraint Thomas has been redirected to the Giro d'Italia and Chris Froome to the Vuelta a España.

Team manager Dave Brailsford took centre stage to lead Team Inoes' Tour de France squad announcement, spinning the news that Froome and Thomas won't ride the Tour de France into an opportunity for the two British veterans, while explaining why he has selected a support team of youthful talent and solid experience to go all-in with Bernal.

"We’ve been looking at how we think we can win this race and we’ve got some ideas," Brailsford said. "Maybe it’s a slightly different approach to what we’ve taken in the past but we’ve got a good game plan and I think that these are the guys to deliver on that."

Egan Bernal: For sure I want Chris Froome in Tour de France team

Thomas, Froome and Bernal spotted back in training in new Ineos Grenadiers kit

After struggling to perform even a support role in the mountains at the Critérium du Dauphiné, Froome and Thomas were dropped from the final eight-rider line-up.

2019 Giro d'Italia winner Richard Carapaz has swapped places with Thomas and will now offer an alternative and vital support to Bernal, who will target a second consecutive Tour de France victory. They will have the support of Pavel Sivakov, Andrey Amador, Jonathan Castroviejo, Michal Kwiatkowski and Dylan van Baarle, with lone British rider Luke Rowe named as road captain.

"So we’ve taken our time and really thought about this year," Brailsford suggested in a video, explaining his Tour de France selection strategy.

"We now know where we’re at, we’ve raced, and we know where everyone else is at and the thing about selecting the right teams for the Grand Tours, the right leaders and champions for the Grand Tours… you’ve got to build on purpose and the decision that we’ve come to, and we’re very excited about, is that we’re going to get Egan and Richard to target yellow once again."

Team Ineos are always careful to analyse the race route of each Grand Tour and the form of their rivals. They saw close-up at the Critérium du Dauphiné that Jumbo-Visma are stronger than ever, if not stronger than Team Ineos. The battle for the Tour de France will likely be fought between Bernal and Primož Roglič, with the likes of Thibaut Pinot (Groupama-FDJ) and Nairo Quintana (Arkea-Samsic) as other contenders.

After seeing the riders perform at recent races, Team Ineos realised they had to back Bernal if they wanted to defeat Jumbo-Visma and win another Tour de France, sacrificing nostalgic roles for Froome and Thomas so that Carapaz and Amador can provide 100 per cent loyalty and guaranteed support.

"Egan has come into this race block and he’s done tremendously well. He deserves the position as the out-right leader of the Tour," Brailsford made clear, ending once and for all the talk about leadership and trusting Carapaz to back Bernal.

"We’ve brought Richard in. We’ve got an idea, and there’s a combination there that we think works. Richard is excited about it, we’re excited about it. We want to use those two guys together.

"Of course we have Pavel, who is going to come into his first Tour, and he’s a big, big talent. He’s got to go step by step, obviously, but on the other hand we’ve seen some performances from him which have been really impressive. We want to give him the opportunity and the experience to bring him into the Tour and the front end of the race.

"Then we’ve got a support group obviously, with a pretty robust engine room and for the first time we’re bringing Amador with us. Castro [Jonathan Castroviejo] has been unbelievably good in this last little block. He knows what it’s about and he delivers," explained Brailsford.

This year's Tour de France will be different in many ways. Froome and Thomas will watch the race from home, while a growing Spanish-speaking contingent race on the roads of France. It is a clear moment of change within the team, one that Brailsford has been quietly preparing for, even if Thomas and Froome hoped it would happen in 2021.

In 2013, Brailsford sparked similar revolution when he sent 2012 Tour de France winner Bradley Wiggins to the Giro d'Italia, and built the Tour de France squad around Froome. The Kenya-born rider paid him back with four Tour de France victories and a total of seven Grand Tour victories.

Now Brailsford has orchestrated another evolution and hinted at having a new game plan too.