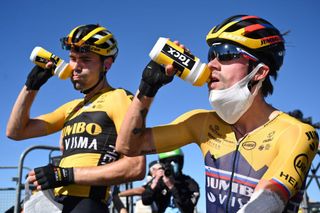 After dictating the terms of engagement at Orcières-Merlette on Tuesday, Jumbo-Visma were content to cede the prime real estate on the front of the yellow jersey group to Ineos Grenadiers on stage 6 of the Tour de France, where Primož Roglič and Tom Dumoulin finished safely alongside their direct rivals atop Mont Aigoual.

With a finale that featured the tough category 1 ascent of the Col de la Lusette ahead of a 13km drag onwards to the finish line, the Tour’s trek through the Cévennes was expected to provoke some frissons among the general classification contenders.

In his role as a pundit for Eurosport, Alberto Contador spoke enthusiastically of the “opportunities” presented by the Lusette’s stiff gradients provided for attackers, but none of the favourites were convinced of the merits of going on the offensive.

Instead, defending champion Egan Bernal’s Ineos squad set a spirited but hardly irresistible pace on the climb, with Roglič, Dumoulin, et al sitting comfortably in their wake as the yellow jersey group came in 2:53 down on stage winner Alexey Lutsenko (Astana Pro Team).

Lutsenko had been part of the day’s early eight-man break, and the escapees swept up the time bonuses at the finish and atop the Col de la Lusette, which no doubt contributed to the lack of urgency among the GC men. Adam Yates (Mitchelton-Scott) retains the maillot jaune, three seconds ahead of Roglič, who declared himself satisfied with how the day had unfolded. The GC contest, it seems, can wait for the Pyrenees.

“Ineos did a really hard tempo. For us it was ok and obviously also for all the rest,” Roglic told Sporza. “It was not totally flat so at the end there were some hills. The breakaway was super strong. It was a nice day for us again, everything under control.”

It was Yates’ first day in the yellow jersey after he unexpectedly inherited the race lead when Julian Alaphilippe (Deceuninck-QuickStep) was docked 20 seconds for taking an illegal feed in the final 20km of stage 5. His Mitchelton-Scott team appeared to allow the early break drift clear, though Roglic downplayed the idea that Jumbo-Visma’s interests would have been bettered suited had Deceuninck-QuickStep retained yellow and maintained their controlling interest at the head of the peloton.

“These are things we don’t really have much influence on, so it’s better we keep our focus on ourselves and what we are doing,” Roglic said. “So far we are doing really good, so that is the main challenge for us.”

After admitting to suffering at Orcières-Merlette on Tuesday, Dumoulin enjoyed a more comfortable outing on the haul towards Mont Aigoual. Jumbo-Visma’s Wout van Aert and Sepp Kuss had whittled down the yellow jersey group on that occasion, but this time out, the Dutch squad preferred to relinquish the pace-making role it adopted there and at the Critérium du Dauphiné.

“The race went exactly as we had expected beforehand. The top of the Col de la Lusette was too far from the line to try anything. This was an ideal scenario for us.”

After a prodigious display of pace-setting at Orcières-Merlette, and then a rapid recovery to win the bunch sprint at Privas 24 hours later, Van Aert had a less onerous afternoon en route to Mont Aigoual, quietly dropping back on the Col de la Lusette and coming in over a quarter of an hour down. Jumbo-Visma still had five riders – Roglic, Dumoulin, Kuss, George Bennett and Robert Gesink – in the yellow jersey group at the top of the ascent.

“Nothing happened GC-wise. The plan was to be in the front all day with Primoz and Tom and bring them to the finish without any problems. We succeeded at that,” Van Aert said.

“We chose to save a bit of energy today. The Tour is still long and there are still plenty of tough days to come. It was a fast stage, so we couldn’t rest on our laurels either. The team is in a good place and our leaders are in good shape.”

Even though Jumbo-Visma scarcely rode on the front on stage 6, save for a brief stint on the category 3 Cap de Coste, their influence on the race was evident, as AG2R La Mondiale directeur sportif Julien Jurdie pointed out to Cyclismactu after the finish: “Nobody dared to attack. Everybody is afraid of the Jumbo-Visma train riding behind an attacker.”