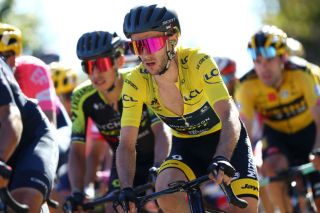 Tour de France leader Adam Yates (Mitchelton-Scott) came through his first stage as the maillot jaune with a minimum of challenges from the other GC contenders and with his squad keeping firm control on events on the final ascent to Mont Aigoual on stage 6.

Ineos Grenadiers did much of the pace-setting on the main mountainous challenge of the day, the Col de la Lusette, as had Jumbo-Visma on the preceding third-category ascent, the Col des Mourèzes. But neither of the Tour’s two most powerful teams actually attempted to test the strength of Yates' grip on the lead.

Then, with the break soaking up all of the time bonuses and Mitchelton-Scott taking over policing duties, a brief, somewhat symbolic, dig off the front by Julian Alaphilippe (Deceuninck-QuickStep) in the closing metres was the only point when any of the GC riders actually made themselves visible.

Yates was visibly satisfied with the outcome of the day. He reasoned that the stage’s format, with a flat start, then a longish stretch of relatively easy climbing coming after the Lusette, all made for a controlled race.

"Everybody is keeping their powder dry for later dates," Yates argued after the stage.

"All in all it was a good day. That steep climb was a bit far out, and the finish wasn’t so hard, so it would have been difficult to stay away. It would have taken a lot of energy to get a few seconds."

On top of that, he pointed out, "all the bonuses were all taken, too. And there was a lot of flat in the first part, so it might have been tricky for me to get away not even being in the lead."

Yellow or no yellow, and assuming Friday’s rolling to flat leg westwards towards Toulouse passes off incident-free, Yates has his eye on the upcoming stages in the Pyrenees, where his brother Simon won, on two occasions, last year.

However, as he pointed out, his room for manouevre is currently limited because "it’s pretty hard to throw away time when you’re in the lead" of the Tour de France.

"I know quite a lot about the climbs we’re doing and it’s going to be super tough. I’ve got a strong team here not just for the flat but also the climbing stages, so I’m looking forward to it," Yates reasoned.

His own condition, he said, was solid and being in yellow for the first time in his career - and indeed in his first lead in any Grand Tour - was something he enjoyed: "I’m feeing good, the stage got a bit grippy towards the end but I was fine. Dream is a strong word, but you grow up, everybody wants to wear yellow and it’s a nice experience."

He did reveal that he is aiming to stay in yellow at least in the short-to-mid term - "hopefully for a few more days", as he said -  and given the Pyrenees are his kind of terrain, that would seem only logical, as well as desirable.