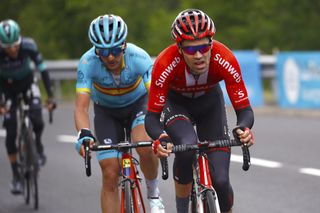 Sunweb team manager Iwan Spekenbrink has told the Dutch press that "there's life after Tom Dumoulin" in response to the WorldTour team having lost their GrandTour leader ahead of the 2020 season, with the 28-year-old moving to rival Dutch team Jumbo-Visma.

Spekenbrink told newspaper de Volkskrant last week that the team has recovered from big-name riders leaving the team in the past – such as Marcel Kittel and John Degenkolb – and that it would do so again.

The 43-year-old also described learning about Dumoulin's hope to join Jumbo-Visma via a report in Dutch newspaper Algemeen Dagblad just ahead of this year's Tour de France, which the injured Dumoulin was unable to take part in.

"We would have preferred to go all out again with Tom next year for the Tour win," Spekenbrink admitted when asked whether he had tried to retain Dumoulin. "But it soon became clear to us that he had already made his decision.

"Tom no longer had the feeling that he could get the most out of us. The elastic had been stretched. He didn't want to continue with us, which meant that he had to go to one of the other 17 [WorldTour] teams," he said.

Spekenbrink told Volkskrant.nl that the team would simply "keep doing what we're doing" until it had recovered from Dumoulin's departure.

"When John Degenkolb, one of the best Classics riders, left" – ahead of the 2017 season – "we recovered. That will happen again now. There is also life after Tom."