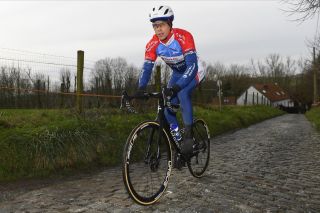 Niki Terpstra has been airlifted to hospital with serious injuries sustained in a crash while training between Enkhuizen and Lelystad in the Netherlands on Tuesday. The Team Total Direct Energie rider's injuries are serious but not life threatening, reported the Dutch news outlet NOS.

"Unfortunately the rumors are true. Niki crashed hard today during a bike workout. He's in the hospital and will have to stay here for a few more days. He is not in mortal danger but will need time to recover from this," confirmed his wife Ramona Terpstra.

According to the NOS report, Terpstra was motor-pacing when he swerved to avoid geese. He then hit a rock and crashed.

He was transported by helicopter to hospital where doctors confirmed he has a collapsed lung, a concussion, and fractured ribs and a collarbone, according to the NOS report.

Terpstra won Paris-Roubaix in 2014 and Tour of Flanders in 2018, both while racing for versions of the WorldTour QuickStep team. He stepped down to Professional Continental team Total Direct Énergie last year but experienced several setbacks with crashes and injuries. At the Tour of Flanders he crashed and suffered head trauma, and he was later forced to depart the Tour de France with a fractured scapula.

He was preparing to begin the revised late-season calendar, which was halted due the COVID-19 coronavirus, with a focus on the rescheduled Tour de France, Tour of Flanders and Paris-Roubaix.