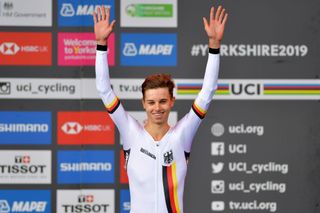 Brenner on the time trial podium at the Yorkshire Worlds in 2019 (Image credit: Getty Images Sport)

Team Sunweb have announced the signing of German teenager Marco Brenner, who will join the team for the 2021 season on a four-year contract.

The 17-year-old will join an increasing youth movement at the German-registered WorldTour squad, which signed up seven neo-pros for 2020 and has an average age of 25. Uno-X youngster Andreas Leeknessund will also join the team next year.

Brenner won 20 races at junior level in 2019, including the Tour de Pays de Vaud, the German road and time trial titles, the junior Tour of Austria and the GP Général Patton. He is also the German junior cyclo-cross champion and finished third at the junior time trial at the Yorkshire Worlds.

"Team Sunweb has a great track record of helping young talents to progress and I like that the team will give me time to develop and that we share the same goals for the future," said Brenner.

"The main goal is to make consistent steps and continually learn from everyone around me – this is the perfect environment for me to be able to do so. The team’s approach to 100 per cent top sports is something that really appeals to me and I fully want to commit to it. I look forward to working with the experts from the team to become the best bike rider I can possibly be at Team Sunweb."

Brenner impressed the team at the Deutsche Talent-Tage last year, a day which saw 13 young riders undergo testing and workshops with Team Sunweb's coaches in conjunction with the German Cycling Federation.

The team's head coach Rudi Kemna said that he's confident that the team is a good fit for Marco's continued progression.

"Marco really impressed us at our Deutsche Talent-Tage, performing excellently in our tests and standing out in workshops," he said. "In 2019 he showed that he can transfer those test results into superb race results, and we see him as one of the biggest young talents in the peloton.

"Marco's also very ambitious and driven, which fits well with the team's environment. With his young age in mind, we will gradually work on his development together, constantly monitoring the process with a well-balanced racing program. We are confident that with our experts and Marco's natural talent, that this is the best environment for him to take the next step in his development."