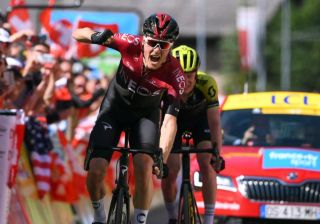 Team Ineos is the latest squad to be hit by the effects of early-season illness before Saturday's Omloop Het Nieuwsblad, with Dylan Van Baarle not include in the British team's final line-up.

Van Baarle joins fellow Dutchman Mathieu van der Poel (Alpecin-Felix) on the growing list of absentees, while Philippe Gilbert (Lotto Soudal) has admitted he is not at his best after missing a week of training before the Volta ao Algarve.

Van der Poel made his 2020 road debut at the Volta ao Algarve after dominating the cyclo-cross season. However it emerged he was suffering from flu and a high fever on Wednesday night, and his team announced his absence as they posted their squad for the race to Instagram. Van der Poel is now due to return to racing at Strade Bianche before targeting all the cobbled Classics.

The ever-adaptable Leonardo Basso has been brought into the squad and will ride in support of Ben Swift, Gianni Moscon, Owain Doull, Luke Rowe, Chris Lawless and two-time Omloop Het Nieuwsblad winner Ian Stannard. Jhonatan Narváez is set to be included in the team for Sunday's Kuurne-Brussel-Kuurne, replacing Moscon.

Van Baarle was expected to be one of Team Ineos' leaders for the opening weekend in Belgium after a strong start to the 2020 season in Australia. However, he failed to start the Volta ao Algarve and needs more training before returning to racing.

"I'm OK again but not yet ready to race," Van Baarle told Dutch website WielerFlits. "I haven't been able to make a serious effort for a week. I need a few training sessions to improve on that, and important races are coming."

Van Baarle's next race is expected to Paris-Nice, where he will line-up alongside 2019 Tour de France winner Egan Bernal.

Team Ineos are already in Belgium for the opening weekend of racing in Belgium. Several riders tested their bikes and cold-weather clothing during a training ride on Thursday as snow was in the air and the cobbles of the hellingen climbs were covered in water.

The wind and rain that has blasted northern Europe for the past month will stick around to provide a gruelling introduction to the Classics campaign this weekend. Both the Omloop Het Nieuwsblad and Kuurne-Brussel-Kuurne have been cancelled due to snow in the past 15 years, while Kuurne-Brussel-Kuurne was memorably hit by a cyclone in 2010.

The current forecasts suggest heavy rain and persistent southerly winds, with gusts reaching 80kph and temperatures of around 5°C.

Cyclingnews will have full live coverage of the racing in Belgium during the weekend.