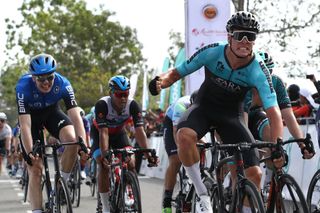 Australian sprinter Taj Jones will be able to count four-time Tour de France winner Chris Froome as a teammate when he joins the UCI WorldTour-level Israel Start-Up Nation team on a three-year contract, starting in 2021.

Jones' stage victory at the Tour de Langkawi in February helped to seal the deal, and the 20-year-old will be making the step up from the Continental-level ARA Pro Racing Sunshine Coast team – part of the Australian Cycling Academy programme – which is based in Sunshine Coast in Queensland.

Jones joined his current team in 2019, and went on to take two third-place finishes as well as his victory on stage 2 at this year's Tour de Langkawi, where he edged out NTT's Max Walscheid – who's currently racing at the Tour de France – and B&B Hotels-Vital Concept's Jérémy Lecroq.

"It's incredible to think about where I have come from and where I am heading, to be a part of the same team as a legend like Chris Froome, along with other world class riders is exciting, and I can't wait to see where I can take my career under the guidance of a WorldTour team," said Jones in an Australian Cycling Academy (ACA) press release this week.

"I'm also really appreciative of the ACA team, led by [team founders] Ben Kersten and Matt Wilson, and all the support staff, including Henk Vogels, Stu Shaw and USC [University of the Sunshine Coast]-based high performance manager Aaron Turner. Their guidance and experience in the elite levels of cycling has certainly helped to fast track my progress," he said.

"They've made all the mistakes in the past so I don't have to make them myself, which certainly helps fast track my progress," Jones continued. "The ACA pathway program is absolutely world-class, with a strong focus on the cyclists' performance on and off the bike, and I have no doubt that this philosophy will see other members of the team move to WorldTour teams in the next few years."

ACA managing director Ben Kersten added: "Taj has shown a strong aptitude for hard work, determination and the willingness to learn since joining our team after winning the Queensland under-23 title and taking numerous National Series top 10s in 2018. He should be congratulated for his achievement of being the first of our riders to go to what is essentially the highest level in our sport.

"The ACA was created to ensure there was a pathway for developing young riders to turn professional and compete on the national and international stage. It's certainly validation of our strong 'Live, Learn and Ride' philosophy, which Taj has fully embraced, and I am certain this is one of the factors that has impressed the powers behind the Israel Start-Up Nation team," said Kersten.

"Taj came to our attention after winning a stage in Langkawi, and getting a podium against solid pros. He's a young guy who last year was not quite ready, but used his time effectively to prepare before taking advantage of his first chance to win a high-level sprint. After that win he went straight back to work, and his progress during the COVID situation is really exciting," Dempster said.

The ACA press release added that it's Jones' intention to move to Girona, Spain, later in the year, where many of the Israel Start-Up Nation riders are also based.