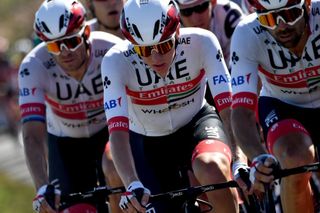 From team leaders to domestiques, favourites to also-rans - anybody can be at risk in a Tour de France crash and on stage 10's welter of pile-ups and near-misses, GC favourites Tadej Pogačar (UAE Team Emirates) and Guillaume Martin (Cofidis) were two of the biggest names to hit the deck.

Neither rider was seriously injured but both took their time getting back to the main peloton as it negotiated an exceptionally dense succession of road furniture in the last third of the stage at high speed.

Pogačar and Martin both went down in the same mass pileup some 65 kilometres from the line, and as Martin told reporters afterwards, although he had no idea how the crash happened, the consequences were clear.

“It was as we were coming into [the town of] Rochefort, there was a crash in front of me and I couldn’t avoid it. Throughout the day the race had been very stressful, with a lot of roundabouts, traffic islands and so on and the crosswinds added to the stress.”

“The first part of the course had been tough, but that’s normal in a Grand Tour there are easier moments and harder ones. But I’d just got through all of that when the crash happened.”

Guided by the whole team back to the main bunch, Martin came through the last big split immediately before the bridge onto Île de Ré in the front group, with teammate Christophe Laporte - formerly a lead-out man for ex-Cofidis sprinter Nacer Bouhanni - ably guiding him through the peloton.

“I had a bit of back pain after falling, it could be my vertebrae took a blow, and we’ll have to check that out later once I’ve had some time to recover a little,”  Martin said afterwards.

“I hope it’ll be OK and that I can recover well and we can get back into the mountains soon where things are more decided more by your physical condition, not by your luck.”

Pogačar agreed with Martin that the racing had been exceptionally aggressive from the start, and he too had been entangled in a crash despite being as cautious as he and his team could be in exceptionally high-risk circumstances..

“The team stayed near the front all day and kept me out of trouble as much as possible,” Pogačar, who already lost time in the echelons last Friday, reported afterwards.

“When I crashed, the guys waited and got me back on. [Teammate] Davide Formolo crashed hard, although he managed to finish the stage. He’s in a lot of pain, and we hope he can recover.”