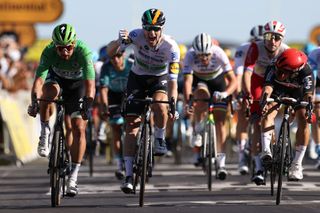 "I thought I’d be in a flood of tears but I'm just in shock…. Sorry for crying, I don’t mean to be a cry baby. I just want to thank everyone involved in this, the whole team and Patrick [Lefevere] for giving me this opportunity and everyone it took to get to here, obviously my wife too and everyone around me.

"What can I say for today. It was a stressful day with everyone worried about the wind. It was almost all of the stage a headwind with some places a crosswind. There were some crashes and split of the group. In the end it was a messy sprint but, well, Sam Bennett showed he can win the stage and he took the green jersey. But we are about halfway in the Tour de France and I think there are still some important opportunities to take the green jersey back." (Bora-Hansgrohe)

“It was a different stage but it was quite a nervous and stressful stage from the start all the way to the finish. As a team, we managed it really well and the guys did a really good job. We can be happy at the end of this stage and look forward to the next ones.”

[On crashes] “I always say that as long as you’re in one piece quite a lot of things are possible. It’s just really important to be there and to watch out.”

[On Slovenian cycling] “We have two million people and a lot of top athletes. It’s crazy and especially for us because before we were riding but without so many results. Now, myself and Tadej [Pogačar] … I’m thankful that we are able to write the history of cycling.” (Flobikes)

"We all knew it was going to be a stressful day, we knew there would be wind and there could be splits, so it was fast all day, with a lot of nerves and a lot of stress. It was mostly nerves, because in the end there wasn’t so much wind but everyone wanted to be up front. Fortunately, none of our riders crashed." (France Télévisions)

"Sam has a lot of talent, he’s very strong, and we tried to help him as much as possible. We’ve always backed Sam. He’s someone who needs reassuring, so we are always behind him. He’s very strong and deserves his success.

"My day was all good. It was nervous but I felt good – a lot better than the day before the rest day, so that bodes well for what lies ahead. Another rider broke my wheel before the bridge, so I just did as much as I could for Sam and then finished calmly." (France Télévisions)