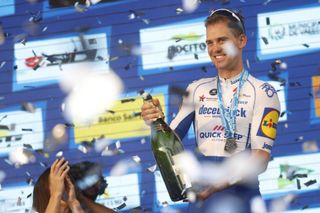 It's not always a portent of things to come, but getting off the mark early can make a world of difference to a season. At the beginning of 2019, Zdenek Stybar (Deceuninck-Quick-Step) had gone more than 18 months without raising his arms, but victory on the final day of the Volta ao Algarve was a liberation – a moment that set the tone for a fine spring campaign that yielded success at the Omloop Het Nieuwsblad and the E3 BinckBank Classic.

In El Villicum on Saturday, Stybar produced a canny attack in the final kilometre to land stage 6 of the Vuelta a San Juan. For the second year in a row, his first race has yielded his first victory. The success of his campaign will, of course, be judged on what happens in March and April, but Stybar welcomed the early bouquet.

"It's always nice to win early in the season, especially after the winter, because you never know how your condition will be," Stybar said. "I know I still have some work to do before the big races. Strade Bianche, the Tour of Flanders and Paris-Roubaix are my big goals this year, as they are every year. I'm just happy that I'm on track and I can keep working on my shape."

Stybar's victory was, quite literally, constructed on the track. The stage finished on the Villicum motor racing circuit and the Czech took time to study the lay-out of the track while training with his Deceuninck-Quick-Step team in the days preceding the Vuelta a San Juan. He realised that the two bends in the final kilometre lent themselves to a late attack.

"We did some training here last week. We were having fun here with the guys, but we also tried in the last kilometre to make a big attack. So today in the team meeting we decided that I'd try," Stybar explained. "I had a free role today so I could try to jump in the last kilometre, but that could also help to make a good position for [sprinter] Alvaro Hodeg, so it was a win-win situation."

Having suffered in the soaring temperatures during Saturday's stage, however, Stybar had doubts about his ability to pull off the planned heist in the final kilometre. He needn't have worried. His acceleration came just as Fernando Gaviria's UAE Team Emirates cohort hit the front in a bid to tee up the sprint, and he immediately opened what proved to be a winning margin.

"It wasn't easy to choose the right moment because I didn't feel so good during the day as it was extremely hot," Stybar said. "I couldn't cool off and I had a bad feeling with 2km to go. But then in the last kilometer, when I saw UAE getting lined up, I thought, 'OK, this is the moment of surprise,' and I went for it."

There were no surprises for Stybar's teammate Remco Evenepoel, who looked at ease when the peloton briefly fragmented in crosswinds with 80 kilometres remaining, defiantly taking some turns at the head of the front group before order was restored. The 20-year-old rolled home in the bunch and carries a lead of 33 seconds over Filippo Ganna (Italy) into Sunday's flat final stage in San Juan.

"I wanted to take a small revenge after yesterday," Evenepoel said. "Well, not revenge, but I knew it was a dangerous point from last year's race. I was also in the front at this point.

"The wind was sometimes a crosswind, but not enough. If the wind was more from the side, then the bunch could have exploded, but we had no problems. I came safely to the finish and 'Styby' won, so there are only positive thoughts today," he said.