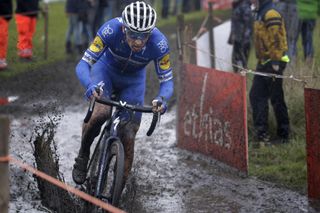 Zdenek Stybar's cyclo-cross season got off to a low-key start, with the former world champion taking 12th place in the Ethias Cross in Essen. The Deceuninck-Quickstep rider enjoyed plenty of support from the spectators but a poor start and mid-race puncture ended any hopes of a top result in a rainy, muddy race.

"It was tough", Stybar said according to Het Nieuwsblad. "I enjoyed it.

"I didn't have a good start. I was a bit blocked there, but I expected that. In the first lap I just followed wheels, I couldn't pass anyone. After three laps I found the right rhythm and I sat with David van der Poel, but then I had a puncture. It took me a lot of strength to get back into the rhythm. I had it back in the last three laps, but it was tough."

Stybar, a three-time world champion and winner of the World Cup and Superprestige in 2010, transitioned from cyclo-cross to road when he joined Quickstep in 2011, but has continued to incorporate some cyclo-cross into his offseason. The 33-year-old hasn't won a cyclo-cross race since his 2014 world title as he has poured more emphasis on evolving as a Classics racer.

The Czech won Strade Bianche in 2015 and finished second in Paris-Roubaix behind John Degenkolb and again behind Greg Van Avermaet in 2017. This year he won both the E3 Classic and Omloop Het Nieuwsblad.

After a road season that stretched from the Volta ao Algarve in February through to the UCI Road World Championships in Yorkshire in late September, the 33-year-old is a bit behind on form compared with his cyclo-cross competitors in Essen, but said he found a perfect course to start on, with a lot of technical turns and few power sections. "There were few parts that you really had to power through, so I couldn't blow up, it was one turn after another."

Stybar also benefitted from the absence of top stars like Mathieu van der Poel, Toon Aerts and Eli Iserbyt, and was perhaps the crowd favourite. "I really enjoyed it. It seemed like I was racing for the win, there so many supporters cheering for me."