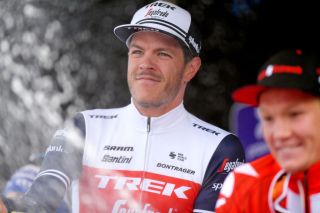 The 2019 Spring Classics campaign saw Jasper Stuyven and the whole Trek-Segafredo team performing below par. Despite showing good form in September, he wasn't selected in the Belgian roster for the World Championships. But the foul weather during the 75th Omloop Het Nieuwsblad was similar to the epic circumstances at the last year's Yorkshire Worlds, and seen as a chance for redemption.

"Obviously it's a nice revenge", said Stuyven in Ninove, at the post-race press conference.

The 27-year-old has been regarded as a top talent for many years now but there's a big difference between being one of the favourites for a Classics victory and actually winning a Classic.

On Saturday afternoon, Stuyven turned his own dreams and expectations into reality but also those of the team, as it turned out. "I finally win a Classic. I've never been better, from that point of view, both in terms of physical and mental condition," Stuyven said.

"Last night I told the team that it wasn't my ambition to win the race. It was my ambition to show that last year was an accident. I wanted us to show that the team was there. I believed in the guys. In 2018 we were also strong as a team. It's nice to see that the whole team was going for it, that we were all ready. That was nice. It's even nicer that I was able to finish it," Stuyven said.

Coming into the race, Stuyven was breathing confidence. He's often been strong in the Belgian opening weekend. He finished fourth in the Omloop in 2018, and he won Kuurne-Brussels-Kuurne in 2016 and finished as runner-up the following year.

"I really believed in it. I knew how my preparation was. I knew that I was really relaxed. I knew that I was mentally OK and how hard I had trained," Stuyven said. "We started the season well with the team. There was a good vibe in the team, which we kept from the end of last year. It all helped to make me feel that I knew it was possible. It's nice to show that it works out in the first Spring Classic of the year."

Just like last year, Stuyven crashed in the Volta ao Algarve but this time around things were different, he said. "In 2018 I also crashed in the first stage but then I rode a good Spring Classics campaign. This time I was calm. I knew straight away that the crash wasn't serious. I felt like it had to happen to be there the next week."

That was in stark contrast with his Algarve crash in 2019. "Back then I had a good build-up but a really hard crash. Then I lost too much weight and then I got ill. I panicked that I had to get back too quickly to be ready for the next Classics. That ended terribly."

Stuyven has been working together with a psychotherapist for some years now. It helps him to put things in perspective and approach the races in the best mental condition that is possible. That was different in the past.

"Last year, I didn't work as much on the mental front as I should've done. I thought I had it all under control whereas that was totally not the case. That was probably the year that I needed it the most. I wanted to pick it back up this year. It's also a matter of working on it all the time, even when things are seemingly going well," Stuyven explained.

In Saturday's race, Stuyven featured in a breakaway move that was formed at long distance from the finish on a section that wasn't marked out as decisive. "I was the last rider to bridge up. In the past I probably wouldn't have dared to do it, being afraid to lose. Daring to lose is a totally different approach. I feel like I'm strong, also mentally I'm calm. There's no stress."

Also the team seemed to breath the same approach. Much earlier in the race, at 130km from the finish, the Trek-Segafredo team featured with four riders in a group of fourteen riders when echelons were formed into the crosswinds.

"In this weather it can happen everywhere with the wind and sometimes rain. Straight from the start of the race we were there, all together. It wasn't a bad thing to take the initiative when everybody was there.

"We really have the riders who like to race in this weather. I believe in these guys. We grant each other success. We're a team which is capable of being a force next to the other strong forces."

Bearing the fruits of altitude training

Stuyven seems to be bearing the fruit of an altitude training camp on the El Teide volcano in Tenerife, together with teammate Edward Theuns.

"Now you can write that it works," Stuyven laughed. "I've worked hard over there. I really like to train there. Last year I discovered it with Edward in May and then I rode well in Switzerland and the Tour. I really worked hard there with Edward.

"It was super fun. We train seriously but we don't live there like monks. We had a lot of fun. In the Algarve I was quite tired due to the training camp and that wasn't easy to cope with. The goal was to be ready today and that worked out perfectly."

"Everybody was too relaxed in the group because we had two minutes. It annoyed me. If Mike and Frederik really weren't allowed to pull along then I was worried that it would go wrong," Stuyven said.

I can't tell that I felt like I was the strongest in the group but I did feel certain that I would be in the mix until the final kilometres. It still has to happen though. On the Muur it might as well have been somebody else who led the group."

On the famous Muur in Geraardsbergen, Stuyven powered away together with Yves Lampaert (Deceuninck-Quick-Step) but also Sören Kragh Andersen managed to join them.

"Yves and I were somewhat frustrated about Sören because we didn't know if he was really dead-empty or if he was playing poker. He said that he was dead but I wasn't sure," Stuyven said.

When Lampaert attacked, Kragh Andersen got dropped. "Yves went where I wanted to go. It was mainly about going for the victory or about knowing if Soren was really dead or not. Nobody was certain in the group. I might have collected some good results in the sprint but I've seen some good sprints from Yves too, and also Soren rode some strong sprints after a tough race." In the sprint, Stuyven easily managed to hold off Lampaert.

During the upcoming Spring Classics it's clear that Stuyven will be a force to be reckoned with.

"I'm not going to say that I'm the top favourite for other races. I'm really satisfied that I've got this one in the pocket. There's a few other races coming up and also Paris-Nice. It'll be a matter of maintaining this form. I'll be very relaxed in the approach to the other races. Now I want to enjoy this victory, hopefully with a good bottle of wine."

Stuyven – a wine lover – expressed his hope that the team's hotel, Weinebrugge in Bruges, would be able to come up with a good bottle on Saturday evening.