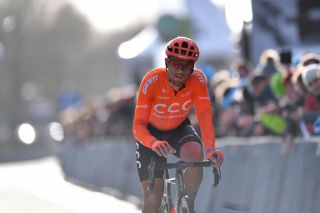 There was a lot of pre-race attention on CCC Team at Omloop Het Nieuwsblad, and not just because Greg Van Avermaet was said to be in flying form; Saturday's race would be the first Classic in which the Olympic champion linked up with new signing Matteo Trentin.

It was a new experience for Van Avermaet, who has largely been without a co-leader in previous years, and there has been a good deal of intrigue as to how the pair will dovetail their efforts this spring. Added to the glare was the fact that CCC were the only WorldTour team without a win in 2020.

That tally did not start ticking on Saturday but, after a day of mixed emotions, there were positives to be taken. Trentin finished fourth, the disappointment of being dropped on the Muur van Geraardsbergen mitigated by his riding either side of it.

10 riders to watch at the Opening Weekend

The day, however, got off to the worst possible start. When the race split in the crosswinds after just 60km, CCC were entirely absent from the front group and were forced into chase mode. Thanks to the dash-cams on the team cars, we saw what director Valerio Piva made of it. "Come on guys," he yelled in frustration. "You knew it would go there – we told you a thousand times."

At the finish in Ninove, Trentin didn't mince his words.

"I don't know what happened, but Trek split it after 62km and we got caught back – a little bit like amateurs, I have to say," he said.

The groups did come back together and CCC then grew into the race, using their numbers to good effect. Van Avermaet launched an attack ahead of the Rekelberg with 76km to go and, when he was reeled in, Trentin made it into the next move to go, which turned out to be the winning one.

"We regrouped, and put it to zero again," Trentin said. "The guys were riding, we split the bunch by ourselves, got back, and from there we were always present. Every move we were there with Greg or me, and my move stuck."

Trentin had six for company as they hit the Muur - the penultimate climb - where he lost ground to Jasper Stuyven, Yves Lampaert, and Soren Kragh Andersen. He settled into time trial mode and was just 10 seconds down at the bottom of the Bosberg, but was never able to close the gap on the 13km run-in to the finish.

"I cannot be too disappointed. I wasn't able to follow the guys on the Muur, but shit happens," Trentin said. "I'm happy because I rode super hard, and being alone for basically 15km and only losing a few seconds all the way to the finish, it's a really good performance.

"When you have three guys riding, everyone knows they're on the podium and it's easier for everyone to work. You need to believe – if they start looking at each other and stop riding for just 10 seconds then for sure I'm going to be back – but it didn't happen, and that's it.

"Of course, next time, I need to be there, because the will is to win, and not make a nice time trial alone chasing somewhere."

As for Van Avermaet, the two-time former winner was frustrated that his attack came to nothing, and, once Trentin went clear, he was resigned to sitting back and watching the race unfold outside of his control. That, of course, comes with the territory of shared leadership.

"I felt that it would happen there. I tried but nobody joined me. Afterwards they rode away," Van Avermaet said.

"It's tactics. It wasn't bad but that's cycling. It was good in one way because I was allowed to save some energy in the chase group, and if we came back I certainly had a chance. That's cycling."

Although he couldn't really show it, Van Avermaet's form is clearly there and although Trentin conceded there's 'still work to be done', he felt that was 'to be expected'.

"Of course, it's a disappointing result but I'm happy with my race and how the team raced today," Trentin concluded.

"We were on the back foot but managed to get back and get on the front foot in the next breakaways, so the team reacted well to a bad situation. "They're all things that are going to come good in the next Classics – this is only the start."