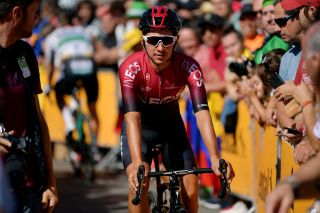 Colombian rider Sebastian Henao will ride for Team Ineos for a further two season after extending his contract, taking him into his seventh and eighth seasons with the British WorldTour team.

The 26-year-old joined Team Ineos – then Team Sky – in 2014, and has since ridden six Grand Tours in the service of the squad's leaders.

"I'm very excited to be able to continue with this great team," Henao said of the announcement on the Team Ineos website. "Ever since my first season, I have felt at home here – it's like my second family. All of the team, riders and staff, are incredible to work with and I have learned a lot in my last six years here.

"I favour week-long races and especially the Grand Tours," he continued. "I want to keep developing and improving my skills in these races. I have more experience now and I'm able to contribute even more to help the team and give my all."

Team Ineos race coach Xabier Artetxe said that Henao's progression to have ridden two Grand Tours in one season for the first time in 2019 – the Giro d'Italia and the Vuelta a España – shows that he's ready to take another step up in his role as one of the squad's highly valued domestiques.

"Sebastian has become a really good support rider and he feels comfortable doing this job for the big leaders in the team," Artetxe said. "He continues to develop in this role and he's a solid rider in the mid-mountains.

"He's gained more and more experience with each season, including in big races like the Giro and Paris-Nice. The sports directors and leaders all trust him, and, after doing two Grand Tours this season, he's at a key point in his career. He's in a great environment where he can continue to improve and be solid throughout a season."

Henao's older cousin, Sergio, was also with the British team for six years, but moved to UAE Team Emirates at the start of the 2019 season.