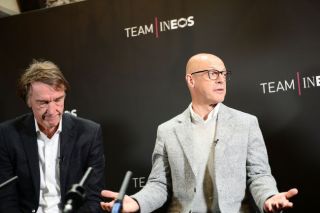 Paul Barratt has joined Team Ineos as the squad's Head of Performance Support and Innovation. Barratt spent the last two years working at British Cycling, where he held a similar role.

Team Ineos have made several staff changes in the last few months, with Rod Ellingworth leaving in April to take over as Team Principal at Bahrain Merida, while Fran Millar moved from the role of Director of Business Operations to CEO in June of this year.

Barratt has previously worked at the English Institute of Sport (EIS) and has experience in water polo, squash and bob skeleton.

"I am delighted to join Team Ineos at what is a really exciting chapter in the Team’s history," Barratt said in a press release issued by the Team Ineos.

"It's the pinnacle of high-performance in professional cycling – a very dynamic, very innovative, forward-thinking organisation – and to come into the team at a time when it’s re-setting its goals in a bid to continue to move forward is something I’m relishing the opportunity to be part of.

"The key priority for me in the short-term will be to observe, listen and learn from the performance team, and then ultimately put forward the long-term strategies that I think can best harness science and technology to help the team progress even further."

According to Team Ineos, Barratt will work alongside longstanding Head Coach, Tim Kerrison.

After Sky pulled the plug on the team in December of last year, with Ineos stepping in to bankroll the operation, the squad won their seventh Tour de France in July courtesy of Colombian rider, Egan Bernal.

Dave Brailsford welcomed the addition of Barratt to the backroom staff.

"Performance support is obviously critical to our success on the bike. It is an area where we have always excelled as a team in the past and one where it is clear other teams are now investing significantly for the future. Since our change of ownership we have been harnessing the drive, ambition and ethos of Ineos to look at all areas supporting our performance system to see where we can do better, what we can change and how we can go faster," Brailsford said.

"Paul’s appointment marks the first step in this important process for us as a team. We have been long-standing admirers of his approach and innovative thinking from his time with British Cycling over the last decade. He is a world-class talent who will now guide and lead this critical work to ensure that the Team Ineos high-performance culture and systems get better still. We are excited about the opportunities to continue to push the limits of human performance and being at the cutting edge of making it happen."

Ineos entered the sport earlier this year after Sky decided to end their association with the team ahead of schedule. The team have strengthened their squad for 2020, signing Giro d’Italia winner Richard Carapaz and handing contract extensions to several riders, including Eddie Dunbar, Owain Doull, and Dylan van Baarle.