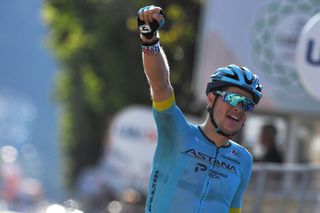 The winner of the 1988 Vuelta a España and four-time green points jersey winner at the Tour de France, Sean Kelly, has told Danish media that he believes recent Il Lombardia winner Jakob Fuglsang (Astana) should race this year's rescheduled Tour de France at the end of this month instead of skipping it in favour of the Giro d'Italia in October.

"It's a shame that he's not going to ride the Tour de France. He's in fantastic form right now, and with what's looking like a very open race, he has a very real chance of getting on the podium," Kelly told Ekstra Bladet on Monday.

"Fuglsang looks as though he's in the best form he's ever had, which you can't really say about Miguel Angel Lopez right now," said Kelly of the Dane compared to the Colombian climber who's set to lead the Astana team in France when the Tour starts in Nice on August 29, and who finished fifth overall at the recent Critérium du Dauphiné.

"Why not go to the Tour with two leaders this year?" he continued. "There are other teams that do that, and Jumbo-Visma are set to take three riders for the GC this year. I don't think that it would be too difficult to change Fuglsang's race programme so that he goes to the Tour alongside Lopez.

"He's been right up there among the very best for a number of years," said Kelly, who wasn't surprised to see the 35-year-old take victory at Il Lombardia on Saturday – his second Monument after winning Liège-Bastogne-Liège in 2019. "He's always had potential, and is now taking full advantage of it.

"It would be great to see him at the Tour, as I truly believe that he could do very well," said Kelly, 64, who now works as a cycling commentator for Eurosport, and whose own best overall finish at the Tour was fourth, in 1985, compared to Fuglsang's best of seventh, which he achieved in 2013.

While Fuglsang is considered more of a climber compared to the Irishman, both riders have won very similar races, with Kelly also having won Liège – in 1984 and 1989 – as well as three editions of Il Lombardia, in 1983, 1985 and 1991.

Kelly also made the point that the rescheduled 2020 season could yet draw to a close at any point due to the COVID-19 pandemic.

"The coronavirus could still change everything," he said. "The Tour still looks as though it will take place, but who can say with any certainty that it will also be the case when it comes to the Giro? Fuglsang has hit top form right now, but no one knows how long we'll be able to keep racing for.

"It should be about seizing the moment and taking advantage of the chance to get a good result at the Tour de France," Kelly said.