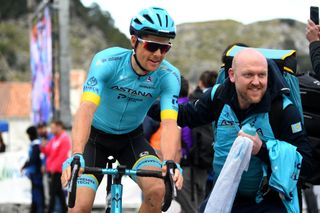 Jakob Fuglsang last week expressed an interest in lining up at the Copenhagen Grand Départ of the 2021 Tour de France on a Danish-sponsored team, but his agent has downplayed the idea and said that he is close to agreeing a contract extension with Astana Pro Team.

Speaking to TV2, Fuglsang admitted that he would be tempted by a reunion with his former Saxo Bank manager Bjarne Riis were he to secure a Danish backer for NTT Pro Cycling. Riis came on board with NTT as manager and co-owner at the start of this year.

Fuglsang explained, however, that he is under contract with Astana for 2021 and acknowledged that “something strange would have to happen” for him to link up with Riis. His agent Moreno Nicoletti has since stated that Fuglsang is on the cusp of extending his contract with Astana by a further year, which would keep him at the Kazakhstani team until the end of the 2022 season. Astana had been one of several WorldTour teams to enact salary cuts during the hiatus from racing due to the coronavirus pandemic.

Fuglsang: It's a pity the Olympics have been postponed

“Jakob’s was naturally the wish of Danish rider who was speaking on Danish television to Danish fans, but let’s not push it…” Nicoletti told Tuttobiciweb. “In fact, I can tell you that we’re working with Alexandre Vinokourov to extend Jakob’s contract for another year and we’re very close to signing until [the end of] 2022.”

The Dane placed 7th overall at the 2013 Tour before helping Vincenzo Nibali to overall victory the following year. He will miss the 2020 Tour in order to lead Astana at the Giro d’Italia.

The 35-year-old started his season with victory at the Vuelta a Andalucia in February, which came shortly after an intelligence report linking Fuglsang and Astana teammate Alexey Lutsenko to Dr. Michele Ferrari was leaked to the Danish media. The riders and their Astana team refuted the contents of the dossier.

The Cycling Anti-Doping Foundation expressed regret that the dossier had entered the public domain and confirmed that it was not opening disciplinary proceedings against Fuglsang and Lutsenko.

Fuglsang is set to resume competition at Strade Bianche on August 1, and he is also scheduled to ride the Tour de Pologne, Il Lombardia and Tirreno-Adriatico ahead of the Giro.