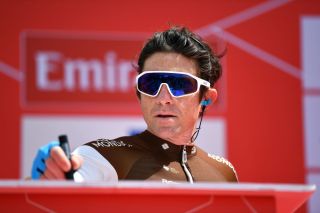 AG2R's Samuel Dumoulin – pictured at the 2019 UAE Tour – will sign off on an 18-year pro career at the end of the season (Image credit: Getty Images)

AG2R La Mondiale's Samuel Dumoulin officially says good-bye to his 18-year-long professional career at the end of this season, with his 31 wins having included a Tour de France stage victory, stage wins at the Volta a Catalunya and the Critérium du Dauphiné, and overall victories at Paris-Corrèze and the Etoile des Bessèges.

As reported in L'Equipe, Dumoulin was fêted at a gala track meeting at France's national velodrome in Saint-Quentin-en-Yvelines on Saturday evening, and will now prepare for a new life behind the steering wheel of a team car as he becomes a directeur sportif next year for his friend and fellow Frenchman Jérôme Pineau at Pro Continental team B&B Hotels-Vital Concept.

"Jérôme and I rode our entire career together, " Dumoulin told ledauphine.com last week.

"They really wanted me to join the team, as they are interested in what I have to offer – which is a desire to win, which is hopefully something I can pass on. It was the team's riders who wanted me to join, so that gives me immense pleasure," he said.

"I first contacted Samuel during the summer, and then he got in touch at the end of the season with his own propositon," explained team manager Pineau.

"In terms of both the team's philosophy and the atmosphere on the team, I think it's going to be a really good fit," he said.

Thirty-nine-year-old Dumoulin's results may have slowed in later years, but he's always been appreciated as a faithful teammate on the three French teams he's been with for his entire career.

After a stagiaire stint with La Française des Jeux in 2001, he turned pro with the Jean Delatour squad in 2002 before moving to AG2R in 2004.

After four seasons, he left for rival French team Cofidis, and it was there at the 2008 Tour de France that Dumoulin won a stage on the world's biggest stage, having been out in front as part of a four-man breakaway for the entirety of the 208km stage from Saint Malo to Nantes before out-sprinting Garmin's Will Frischkorn and Romain Feillu (Agritubel) for the victory.

The day also put Feillu into the yellow jersey, which made what was then a rare double for the home nation, although Dumoulin's stage win is almost as well remembered for five-time Tour winner Bernard Hinault – who used to help with the podium presentations – pushing a protester off the stage who had tried to steal Dumoulin's limelight.

He later re-joined AG2R, in 2013, where he saw out his career, riding his last pro race at the French national championships in June this year.