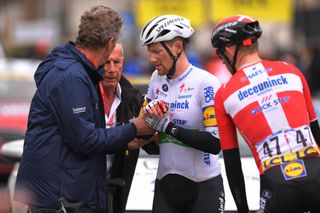 Sam Bennett (Deceuninck-QuickStep) has spent the last few months honing his form and with his return to action penciled in for the Vuelta a Burgos next week, the Irish sprinter has told Cyclingnews that with some racing in his legs he should reach the Tour de France in late August with his best form.

Bennett hasn’t raced since abandoning Paris-Nice in March and spent the majority of the intervening months at home in Ireland as most of Europe was put under strict lockdown laws. The 29-year-old has his aim set firmly on the Tour de France, where he will hope to take his maiden stage win.

“The shape is really good and with a bit of racing in my legs and I’ll be ready. To be fair there’s not much more that I can do now. They only thing that I can do is overdo things but now I just have to stay relaxed, stay healthy and professional and let the racing do the rest. The work is done,” he told Cyclingnews.

The Vuelta a Burgos will provide Bennett with an opportunity to test his legs against a high-quality field, even if only two of the stages are likely to end in bunch sprints.  The five-day race runs from July 28 to August 1.

“I want to get back to where I want to be at and I’m looking forward to it. It’s going to be a compact few months of racing, so I think that I’m ready, and I hope that I’m ready. The whole team is ready in general. At Burgos I should have at least two chances. None of them are easy when you’re trying to win but one of them is a hard one and one should be more of a straight forward sprint. I’ve not looked at it in great detail yet but I will do when I get there. It seems like there are going to be a lot of people looking forward to racing, and it seems like there’s a high standard at the race.”

Bennett and the rest of the field will have to undergo COVID-19 tests ahead of their racing return and extra protocols will be put in place by race organisers as health is made paramount as racing returns. Bennett is confident that the steps taken are needed to protect those involved but also warned of another element ahead of his return to action.

“Hopefully it goes well with Spain going into lockdown again in certain areas but everyone seems to be testing a lot and keeping themselves racing. It’s going to be a challenge also with the heat there, and that will bring an extra little challenge for us.”