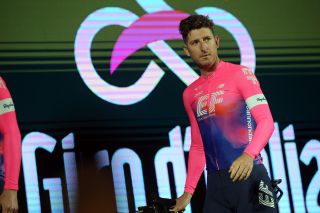 Sacha Modolo (EF Education First) is relieved to have found a cure for his health problems but knows finding a team for 2020 will be much harder. He finished second in a sprint at the La Route d'Occitanie and has since taken other placings at the Adriatica Ionica race and the Tour de Pologne but is running out of races to show what he can do.

Several Professional Continental teams will fold at the end of 2019 and WorldTour teams are signing younger riders to save on salary costs and to prepare for the future. Modolo is 32 years old but is convinced he can still be a successful sprinter.

Modolo will become a father in late October and admits he has never been happier in his personal life. However, his professional career hangs on a thread after a debilitating intestinal fungus wrecked the last two seasons and left him struggling to even climb a flight of stairs.

Modolo bounces back with well-calculated win in Ruta del Sol

Three courses of powerful antibiotics and a special diet have helped him return to health but a lack of results means he has not been retained by EF Education First for 2020, and has so far garnered little interest from other teams in a difficult transfer market.

"I seem to have been forgotten by everybody," Modolo told Cyclingnews from the Tour of Britain.

"I was sixth at the 2017 Tour of Flanders, have won stages at the Giro d'Italia and was always pretty competitive in the sprints. But after two seasons struggling to understand what as wrong with me, it's difficult to convince people what I can do.

"I'm on my way to making a full recovery and I'm sure I can back to my best in 2020 but people have written me. I just need a chance to prove them wrong."

Modolo's last victory was at the 2018 Ruta del Sol. He then struggled to finish races and compete in sprints until a well-known specialist, who has also successfully worked with Barcelona soccer player Lionel Messi, finally diagnosed his problems this spring and explained how to recover.

"Until the 2018 Giro I was riding okay even if I felt something was wrong, then I felt worse and worse. Early this year I was even struggling to go for a walk with my wife and I was dead tired at the end of the day," Modolo explained.

"After the Tour of Flanders it was confirmed I was gluten intolerant; I changed my diet and started the Giro d'Italia but I was quickly on my hands and knees. That's when I visited Dr. Giuliano Poser, who works with Messi. His diagnosis confirmed I had five different fungi in my intestine. He said I'd had them for at least three years, which explained a lot."

Even with the specialised treatment, it will take time for Modolo to get back to his best, he says. But still, the Italian is hopeful that he can get there after the off-season.

"I was prescribed three different courses of antibiotics for 16 days. I've also got a special diet I need to follow for a few months. Dr. Poser says I'll need six months to fully recover. I'm already feeling better but lacking some solid form and a base.

"I know it's going to be difficult because nobody really knew about my problems and neither I or EF Education First really talked about. I was afraid people would think I was just looking for excuses," Modolo admitted.

"But I'm sure I can get back to my best in 2020. I'm not old, I'm not past it, and if I can have a full winter of training, I'm convinced I can be strong and successful again.

"I'd be happy to accept a one-year contract to prove what I can do. I just need someone to believe in me."