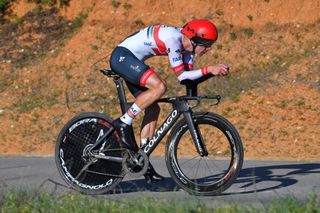 While racing in Belgium restarted at the weekend, with a number of events taking place – which were sadly overshadowed by the death of amateur rider Niels De Vriendt – competition in Portugal also returned, and former road race world champion Rui Costa (UAE Team Emirates) triumphed in a time trial around Anadia, near Aveiro, on the north-western coast of the country, on Sunday.

He beat Rafael Reis (Feirense) by three seconds, while Spain's Gustavo Cesar Veloso (W52-FC Porto) was third, 22 seconds off Costa's time on the 22km time trial course, which started and finished at the Sangalhos Velodrome.

"I had a goal in terms of my performance, and in the end I managed to stay within the limits I had set myself," Costa said on his team's website.

"I did a good time trial, and I felt strong out on the course," he said. "During the lockdown period I worked quite well, and resuming racing with a win is always good for morale."

Costa began his 2020 season at the Saudi Tour, where he won the opening stage and finished third overall. The 2013 road race world champion then rode the Volta ao Algarve on home soil and took fourth place overall, with his season cut short due to the coronavirus pandemic following the final stage of the Portuguese race on February 23.