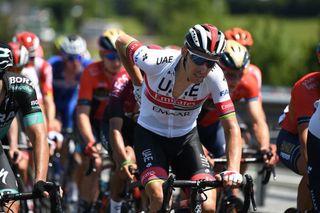 Costa won the Worlds road race in Florence, Italy, in 2013, beating Spanish du Joaquim Rodriguez and Alejandro Valverde. At the time, the Portuguese rider was a trade teammate of Valverde's at Movistar, but Costa made the move to Lampre-Merida in 2014, which morphed into UAE Team Emirates in 2017.

The now 33-year-old had won two stages at the Tour de France just ahead of his Worlds victory, adding to the Tour stage win he took in 2011. After becoming world champion, Costa also won the overall title at the Tour de Suisse for a third time, while his most recent win was the overall classification at the 2017 Abu Dhabi Tour, where he also won a stage.

"One of my priorities was that I wanted to have continuity for my future as a rider, and so I thank UAE Team Emirates for giving me the opportunity to allow me to work with them towards my goals," Costa said in a press release

"It is a great boost to know that we have the confidence of the whole team, and I am really happy to still be part of the great cycling project that is UAE Team Emirates," he said.

In the same press release, it was announced that the team had also signed 21-year-old Italian Alessandro Covi from Continental squad Team Colpack, which means that the team now has 30 riders for 2020, which is the maximum permitted for a WorldTour outfit.

"I can't wait to face this new cycling challenge," said Covi. "I'm happy to do it at a big team like UAE Team Emirates and alongside some great champions.

"The team has put a lot of faith in young riders, and I think I will be in the best place in order to reach the goal of giving my best," he said.

Other notable signees for next season include Joe Dombrowski from EF Education First, Davide Formolo from Bora-Hansgrohe, Brandon McNulty, who joins from Rally UHC, and under-23 time trial world champion Mikkel Bjerg, who makes the move from Hagens Berman Axeon.