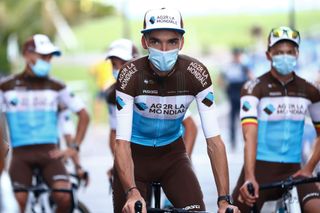 As one of the great French hopes for the upcoming Tour de France, Romain Bardet might be expected to fight – alongside Thibaut Pinot – to end the country's 35-year wait for the yellow jersey. But after a disappointing 2019 salvaged by the polka dot jersey, the AG2R La Mondiale leader has said stage victories are the aim this Tour.

Bardet has twice finished on the podium at the race – second in 2016 and third a year later – and has three stage wins to his name, though has yet to wear the yellow jersey. That's also a goal, he said.

Speaking at a virtual press conference ahead of his final Tour de France for the team he's spent his entire nine-year career with, Bardet praised the race's parcours, saying that there are plentiful opportunities to be aggressive and achieve his goals.

"This year, the main goal for me is not the general classification," Bardet said. "I'm going to take advantage of this year's aggressive profile of the Tour de France to be more attacking and not focus on waiting for the GC.

"I finished five times in the top 10 and nobody remembers them except for the podiums. So here, I want to show a more attacking and aggressive face. A successful Tour de France would be to win a stage and stay on the lookout for the yellow jersey. I think there may be some twists and turns.

"We'll have to find a middle ground to be neither too close nor too far in the GC and stay in the game to try for the yellow jersey. I've never worn it and I think there will be opportunities with this year's profile."

Bardet did not entertain the suggestion that he might sit up in order to lose time and afford himself opportunities to attack unfettered by riders defending their top 10 GC positions. He did, however, say that if top placings in the overall ranking are out of the question, he wouldn't hold on for the sake of preserving a place in the lower reaches of the top ten.

"We saw at the Critérium du Dauphiné that the level was very high among everyone. It won't be catastrophic if I lose 30 seconds or a minute one day, so that I can have a little more freedom at some point.

"In fact, it doesn't really depend on me. We know that there are two teams – Jumbo-Visma and Ineos Grenadiers – who can control the race after two days and if that's the case then not much will happen, and we'll be bored.

"Now, the course has been planned so that there's action and movement and for the yellow jersey to change hands regularly. We have a real course which is conducive to action."

The two teams Bardet named – Jumbo-Visma and Ineos Grenadiers – are likely to dominate the Tour, with team leaders Primož Roglič and Egan Bernal the two top favourites to win the race.

Competition among GC riders is sky-high after a number of riders, Bardet included, changed their schedules to race the Tour after the enforced break caused by the COVID-19 pandemic meant three Grand Tours have been jammed into a 72-day timespan.

The packed field isn't the cause of Bardet changing his goals for the Tour, though. Instead, he said that he feels lucky to be racing among such a high-level group of GC riders.

"The level is very high, as we know. There are younger riders pushing up. But when I'm at my best level I can compete, I know that. The Tour de France is a race of experience which calls on different qualities to last over three weeks.

"I am lucky, as a protagonist, to attend such a 'packed' Tour de France. We've seen the early stages of that at the Dauphiné – aside from Roglič, who was above the fray. Behind him, it's elbow to elbow. The general level has increased, but I'm optimistic about my ability to fight with them."

By the end of September – whether or not he manages to add to his tally of stage wins or grabs a yellow jersey along the way – Bardet will have completed the last of his eight Tours de France at AG2R.

He's heading to Team Sunweb for 2021 but said that his pending transfer doesn't change anything for the Tour. Instead, he stated that his final Tour with his AG2R 'family' will feel more special than the previous seven.

"I will be enjoying every moment even more," Bardet said. "I feel like part of a family here. I'm not leaving AG2R La Mondiale; I just chose to orient my career differently. That doesn't complicate things – on the contrary, it makes every moment more intense.

"I feel full of good energy and my form is improving. I finished the Dauphiné better than I started it. I feel fresh because the interrupted season means that you don't start already fatigued. All the lights are green."