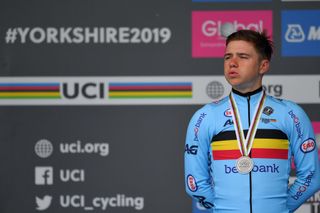 The cycling world waited in anticipation to see how Belgium's 19-year-old phenom Remco Evenepoel would fare in the elite men's individual time trial at the 2019 UCI Road World Championships in Yorkshire. He secured the silver after finishing the 54km event 1:08 slower than two-time world champion Rohan Dennis (Australia), in what he said felt like a gold-medal performance.

"I surprised myself today," Evenepoel told the press. "I knew some big names were going to be difficult to beat. Rohan was one of them, and if you see how fast he came into the finish line, over one minute in front of me, I'm not disappointed at all. I think I can only be happy with my performance of the day."

Evenepoel was among the final third to start his time trial and covered the course in 1:06:14, a benchmark time that lasted to the end until Dennis crossed the line just over a minute faster. Despite being one of the favourites coming into the race, he insisted that he never thought of himself as a medal contender in Yorkshire.

"I'm happy with what I did," he said. "I didn't believe that I could do this in my first year as a 19-year-old. I'm not going to say that it was fun, but I liked the long effort. You work hard for this moment. Everything has to be planned out. You want to get the maximum out of your body.

"If I can achieve what we want to achieve [power-wise] I will be happy, and if there are other better guys, that's life, it's a sport. Today there was only one guy who was a lot better."

Belgium's Yves Lampaert and Victor Campenaerts didn't fare as well as their younger teammate, as both crashed during the time trial. Lampaert, who wasn't seriously injured, finished the event in 48th place at 13:16 slower than the winning time. Hour Record holder Campenaerts was a medal contender coming into the race and was visibly more disappointed. He had slid out in a corner and then required a bike change. He ended up finishing 2:50 slower than Dennis and in 11th place.

Evenepoel and Lampaert will race the elite men's road race on Sunday in support of his Belgian teammates Philippe Gilbert and Greg Van Avermaet. Evenepoel will then take some time off to recover before preparing for next year.

"If I were ready for the TT, I am ready for the road race," Evenepoel said. "It would be difficult for me to win. We have two guys, Phil and Greg, who are made for this course. They are in super good shape; Phil was amazing in the Vuelta and Greg was amazing in Canada. I think those two guys will be dangerous. We have a good team. We can play with a lot of cards. We are in a good position."

Evenepoel is one of cycling's fastest-rising talents. He won double world titles in the junior men's time trial and road race at the World Championships in Innsbruck, turning the heads of nearly every team manager in the business. He was swept up by Deceuninck-QuickStep boss Patrick Lefevere and spent his first year on the WorldTour this year. His outstanding performances included the overall victory at the Baloise Belgium Tour, a stage win at Adriatica Ionica, and victories at Clasica Ciclista San Sebastian and in the time trial at the European Championships.

"I've changed a lot as a person this year," Evenepoel said. "I won five races with the pros became European champion in the time trial, and now the silver medal in the Worlds. I think I'm growing as a person and as an athlete and I'm in a good way at the moment."

Evenepoel's immediate success in the pro ranks, however, has led to him being the centre of much media attention, both in the Belgium press and international cycling media. He said such notice hasn't fazed him. To deal with the general pressures of being a world-class athlete, he chooses to keep a close-knit group of people around him for support.

"It's part of the job. If you have good results, the media gets bigger, and that was the case for me this year. I was a big subject at the beginning of the year, coming to the elites and WorldTour immediately. It was a big challenge, but I proved more and more that I deserve my place," Evenepoel said.

"With all the pressure, I keep doing my job without listening to what other people have to say. I only listen to my coach, the guys around me, Patrick Lefevere is a really important guy in my career. I have a few people who help me to become what I want to become."

Evenepoel will remain with Lefevere's QuickStep team through 2023, but laid out a concrete plan for next season whereby everything will revolve around the Olympic Games in Tokyo and the World Championships in Switzerland.

"I have my ticket to go to the Olympics," he said. "This will be my main goal for next season. After that I have the Worlds again, in which the course will suit me better. It will be more climbing and a harder course. Those two will be important for next season. The races will all function around these two events."

Evenepoel reminded the press that next year's World Championships course will suit him better and as such he hoped to return in a better position to win the rainbow jersey.

"Rohan was exceptional today; nobody was better," he said. "Next year, the course will be harder. I will be a year older, a bit stronger, and hopefully, I will be back stronger. I will work hard. Rohan will also work hard to become a triple world champion. There's still a year to go, and a lot can change in my life, in his life, in the other guys' lives. We will have to be patient and work toward next year."