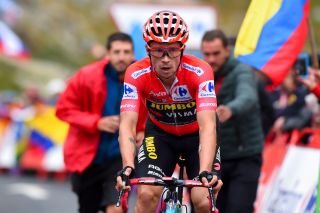 Primoz Roglic (Jumbo-Visma) is now just 24 hours away from overall victory in the Vuelta a España after he came through the last mountain stage through Los Gredos without facing any serious challenges.

As has become a familiar pattern in the last part of the Vuelta, Roglic's team did the bulk of the spadework in the first two thirds of what was an exceptionally difficult, rain-soaked stage, before an attack by one of his rivals, in this case Astana and then Miguel Angel Lopez, saw the Jumbo-Visma riders fall back.

However, whilst Roglic was isolated from thereon, he was able to take advantage of Astana and Movistar's need to enter into defensive mode to try and keep tabs on breakaway Tadej Pogacar (UAE Team Emirates).

The final segment of the final mountain stage saw Roglic remaining firmly in control of his GC rivals as they fought for the right to stand on the podium next to him, rather than attempting any last-ditch direct attack on his overall lead.

"Divide and rule" has been Roglic's strategy ever since he moved into the Vuelta's overall lead in the Pau time trial. From the first major mountain top stage finish in the second week at Los Machucos onwards, Roglic has never attacked, but either allied with riders to gain time on his rivals, or else let them attack each other, whilst reaping the benefits.

As strategies go, that was not particularly spectacular, but with a solid advantage after his Pau time trial performance, Roglic had no need for any other tactic but to play from a strong defensive hand, with ample backing from a solid line-up of Jumbo-Visma domestiques.

Even in the more unpredictable challenges, such as when he was isolated and caught behind when Nairo Quintana (Movistar) made it into a long breakaway across the flatlands of Castille, Roglic was able to benefit from his rivals' fight for the podium. On that stage, after Jumbo-Visma had worked hard early on but could not keep a 40 rider break - what team could? - under control for nearly 220 kilometres, Astana effectively saved his lead by chasing for the final two hours.

In what was close to a new, and in no way desirable, record for brevity for a GC winner's final press conference in a Grand Tour, Roglic upped the total number of questions he accepted from the usual three after each stage to four before leaving on a final transfer to Madrid.

He failed to go into specifics on which stage had been the hardest, saying simply that the last part of the race had been more difficult and that "today was a really hard day. The closer you get to the end, the harder it is."

For a former ski-jumper who only began racing in 2013, to stand as a Grand Tour winner six years later is an exceptional achievement and Roglic recognised "a lot" had happened in his development as a cyclist in that time. "I changed skis for the bike, that was the most obvious one. Then I started riding a bike, first as an amateur and then as a professional. And now here I am, trying to ride with the best guys in the world."

Famous for his usual dour attitude with the press, Roglic denied that he had not been content in the last three weeks, rather, he said, "For sure I was smiling in secret places. It's a nice feeling not to have any really big mountain stages left to handle. But in any case, there's just one day to go and then hopefully I will smile even more."

Having revealed all he wanted to about the Vuelta a España, Roglic then dealt with a final question about how he and new signing Tom Dumoulin planned to fight Team Ineos in the future. "I don't know," he initially answered, "I can't compare one team with another. But for me, the most important thing is that we can fight for the win in almost every race we do. Hopefully, we will fight even more strongly in the years to come."