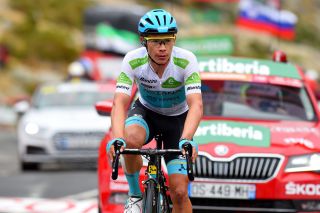 Miguel Angel Lopez (Astana) started stage 20 with the triple aim of doing his utmost to reclaim a place on the Vuelta a Espanña podium, to take a stage win, and to maintain the lead in the Best Young Rider competition, but in the end, the young Colombian came away empty-handed.

Astana's Vuelta a España has not been a failure in anyone's book, with two stage wins and three days in the lead for Lopez in the first week as well as a lengthy spell leading the best young rider's jersey and on the virtual podium.

But despite launching strong individual attacks on both third-week mountain stages and his team working hard, as they have done on almost every high mountain stage, to pull back the break on stage 20, López fell at the final post.

But after Tadej Pogačar (UAE Team Emirates) launched an impressive attack 38 kilometres from the finish, López looked like a man defeated and he even struggled to stay with the other overall favourites on the final ascent to Plataforma de Gredos.

López finally shed 2:12 to Pogačar and with his time loss to Nairo Quintana on the final climb, slumped to fifth overall in the final Vuelta a Espana general classification. But he put a brave face on his defeat.

"I wasn't feeling great and we couldn't get guys ahead in the break of the day, that tactic didn't work out," López told reporters after donning warm weather gear at the finish.

"Ideally we'd have had two or three guys up the road in the early break, and then I'd have been able to work from that," - a tactic which worked well for Astana in the Andorra stage until López was unlucky enough to crash on the rain-lashed 'sterrata section before the final climb.

"Despite that, we went on trying, but it didn't work out, we have to congratulate the podium of Roglic, Pogačar and Valverde."

Referring to his attacks on Peña Negra, López said, "I threw the dice several times but no luck, Pogačar got away and got a lot of time and he was fighting for the podium as well as the white jersey."

"I lost the Best Young Rider jersey, but I don't care because I've got several in my home. Now I'm 25, it was my last chance [at 25] to get it this year. But it was time for somebody else to get that classification, I'm getting old," he joked.

López said that despite initially brushing off the injuries he had received in the stage 19 crash when he went down with Primoz Roglic (Jumbo-Visma) as being relatively minor, in fact, they had been worse than he had revealed.

Movistar and López issue apologies amid Vuelta a España controversy

"I think that had an effect, my injuries have been hurting all day. Then it's the third week, we're all pretty tired by this point in the race, and it couldn't work out. But we'll just have to be satisfied with what we did manage to achieve in this year's Vuelta."

Lopez has won races like the Volta a Catalunya largely thanks to his surging attacks on shallow but lengthy climbs like those that featured on the Sierra de Gredos stage, and he said the terrain suited him down to the ground. But he could not, he said, gain an advantage when it mattered.

"The only problem was that there was a strong headwind and I couldn't open up a gap, even though I tried more than once. Then when the young one"- Pogacar - "attacked, we all hesitated for a moment and by then, the horse had already bolted."

Whether he thought it had been possible to regain enough time to make it onto the podium, Lopez argued "I knew that they [my rivals] weren't going to give me a single centimetre's margin and without any support ahead in the break, I knew it was going to be mission impossible. We tried though."

Even if he did not manage to achieve any of his goals on the last summit finish and final possible opportunity in this year's Vuelta, at the very least at the start of stage 20 Lopez managed to bury the hatchet with Movistar over the controversy that had erupted in stage 19.

Following his post-stage outburst against the Spanish team, Lopez said he had calmed down "when I was in the hotel. I had been very upset after all the things that happened, it had been complete chaos in the last kilometres of that stage.

"But when I thought it all over, I realised I'd overstepped the mark. I apologised to Valverde because that was the right thing to do. We're all human and sometimes we make mistakes, the important thing is to recognise them."