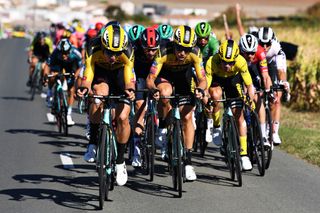 Tour de France leader Primož Roglič (Jumbo-Visma) came through his second day in yellow unscathed despite the fraught conditions that dominated stage 10 from start to finish, but he admitted that the team’s overriding goal of defending his lead meant teammate Wout van Aert could not try for a third stage win.

After victories in Privas on stage 5 and again in Lavaur on stage 7, Van Aert was notable by his absence in the battle for victory on the opening stage of the Tour’s second week, where he finished a comparatively anonymous 37th.

But Roglič explained that on the 168-kilometre crash-ridden dash along the western coast of France, Jumbo-Visma needed all hands on deck for his yellow jersey, and certainly Van Aert had been visible keeping a high pace in the last part of the day when the tension was highest.

“It was a big challenge, a stressful stage like today, and everybody did a perfect job to keep me safe,” Roglič said. “He was needed to do a lot of work.”

He quickly added that he was extremely thankful for all his team's efforts to protect the maillot jaune, with his teammates notably present in force at the head of the bunch as the echelons formed in the last, intense, half-hour of racing.

"I'm wearing the yellow jersey, but it's for all of us, all of us have a part of it," Roglič said.

As for how he got into the position of leading the Tour, it was pointed out to Roglič on Tuesday that he had taken all of his current 21-second advantage over Egan Bernal (Ineos Grenadiers) thanks to time bonuses.

The Slovenian agreed, when asked, that he had had a deliberate strategy of racking up a maximum number of bonuses available in the mountain stages – at Orcières Merlette, where he won, but also in the Pyrenees when crossing summits and at finishes – to try and distance his rival.

"Definitely. I wanted to take as many as possible," he confirmed, "and we'll see in Paris whose favour that is."

Since amassing that time in the mountains, the COVID-19 question has roared back into the Tour's daily narrative, but Roglič, when asked about his reaction to the lack of positive coronavirus tests for riders, said that – just as with Van Aert – his entire focus is on yellow.

"If I'm honest, I didn't really think about it," Roglič said, when asked how he'd felt when the news broke. "We are healthy, racing hard and I'm definitely happy that the race goes on, it's beautiful. As for the director" – Tour boss Christian Prudhomme, who tested positive for COVID-19 – "I just wish him well and that he gets well as quickly as possible."

After Tuesday's arduous stage, Roglič faces another, similarly flat, and likely equally fast, run eastwards towards Poitiers on Wednesday. Depending on tomorrow's events, it may yet prove that stage 10, with its exposed coastal roads, incessant series of road furniture and pent-up nerves in the peloton, was the harsher test of the two.

Whichever it turns out to be, Roglič admitted that the breakneck start to stage 10 and its even speedier conclusion had been "hard, quite nervous and stressful all the way from the start, specially after a rest day."

"It was quite a challenge. But everything went perfectly, the team managed it well, we did a really good job and we can be happy at the end of the stage, I think." he concluded.

Delving deep into his seemingly boundless collection of truisms, which was on full display for two weeks last year when he was in the Vuelta a España's lead, he insisted on a maximum of three questions in his post-race press conference.

Roglič concluded, "I always say, as long as you are healthy and in one piece, quite a lot of things are possible."