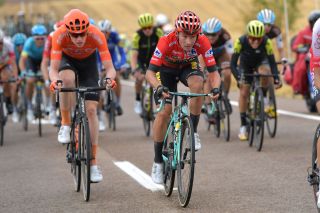 Primož Roglič (Jumbo-Visma) opted for a diplomatic neutrality in the major controversy which erupted during stage 19 of the Vuelta a España after Movistar opted to continue their drive at the front of the peloton even after he had crashed.

Unwritten rules dictate that when a leader falls, his rivals do not attack unless than the race is already 'on'. But in this case, Movistar insisted that they had stuck to their original game plan for the stage which was to try to  form an echelon immediately afterwards, regardless of what was going on behind.

Roglič and a large part of Jumbo-Visma went down where a road narrowed in the town of Escalona, with Tony Martin abandoning and Roglič taking some time to extract himself from the pileup. Adding a bike change into the bargain, he was a minute down on Movistar when he finally began to chase.

Astana's Miguel Ángel López, who lies fourth overall and was also caught up in the crash, was scathing in his criticism of Movistar afterwards, and when Primož Roglič was asked if he had considered never returning to the Vuelta again after all the difficulties he'd faced in the third week, you could have heard a pin drop in the race's press room.

But rather than launch into a tirade like his Colombian rival, Roglič was his usual mild-mannered self when answering.

"I believe that tomorrow I will be one day closer," he said. "We'll see about coming back, but in the end, the nice memories are the ones you remember."

Asked by Spanish television what had happened, Roglič said:  "When I crashed I hit the wall more than anything else and some guys around me were a lot worse off. I'm still here, and that's good."

"As for Movistar, I don't know much about it. We need to see that later on the replay and then I can really comment. At the time, I was more interested in getting my new bike."

Following an enquiry about how he had started racing with Jumbo-Visma back in 2015, question number three of the trio that Roglič was willing to take from written media was another attempt to get him to open up about the Movistar manoeuvre. It was, however met with an almost identical response.

"My opinion is that I don't know what  happened, I was a way behind, I had to change my bike, then try to come back to the front, full gas," Roglič re-recounted. "First of all I'll need to see the replay and then maybe I'll comment."

In either case, should Roglič have other things on his mind and opt for a 'no comment' if journalists return to the question, that would be understandable, given that the race leader faces the final hurdle of the Vuelta a España on Saturday.

The penultimate stage from Arenas de San Pedro to Plataforma de Gredos is a full-bore climbing stage with more than 4,430 metres of vertical climbing. The highest peaks come close to 2,000 metres above sea level and the stage culminates with the last of the race's eight summit finishes.

After that – assuming he comes through unscathed – Roglič will be just 24 hours away from outright victory in Madrid.