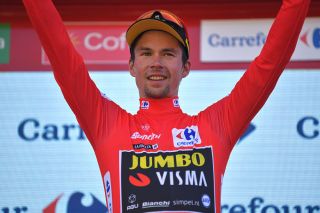 When Laurent Fignon won at La Plagne on the 1984 Tour de France, he told reporters that he had divided his time between “admiring the beauty of the Meije glacier and looking back down the mountain to see how far behind Hinault was.” Vuelta a España leader Primoz Roglic (Jumbo-Visma) will never match the late Fignon as a raconteur, but it seems he shares the Frenchman’s admiration for stirring landscapes.

When Roglic was asked for his thoughts on the race’s forthcoming foray into the mountains of Asturias, his assessment of Monday’s summit finish on the Alto de la Cubilla focused on the natural beauty of the area rather than the difficulty of the climb itself.

“They say it’s beautiful, like Asturias’ Galibier or something, with really nice views,” Roglic said. “So yeah, I’m looking forward to racing there.”

Like Fignon during his dominant Tour victory of 35 years ago, it seems that Roglic is already in a position where he can well afford to enjoy the view. As the Vuelta nears the end of its second week, he sits atop the overall standings with a lofty lead of 2:25 over Alejandro Valverde (Movistar) and more than three minutes on Tadej Pogacar (UAE Team Emirates), Miguel Angel Lopez (Astana) and Nairo Quintana (Movistar).

There is still plenty of distance left to run between here and the concluding stage in Madrid, but it increasingly feels as though only ill fortune can deny Roglic overall victory. The Slovenian has already crashed twice on this race – in the opening team time trial in Torrevieja and again on the dirt road that preceded the final climb in Andorra on stage 9 – but he avoided hitting the ground for a third time during the mass crash in the finale in Oviedo on stage 14.

A number of riders came down in the incident, which took place 800 metres from the finish of a stage won in emphatic fashion by Sam Bennett (Bora-Hansgrohe). Roglic’s current dauphin Valverde and his fellow countryman Pogacar were among the fallers, but the maillot rojo himself managed to sidestep the crash.

“You have to be a bit lucky. It’s always quite fast and crazy in these finals, so you need a bit of luck,” Roglic said. “I think I wasn’t really involved in the crash but still I unclipped. It’s the thing that nobody really likes to crash. For us GC guys the main thing is to avoid this because on sprinter stages, we don’t do sprints so for us it’s about trying to avoid it and take as few risks as possible.

So far in the second week of this Vuelta, Roglic’s pre-eminence has brooked no argument. His resounding victory in the Pau time trial triggered a sudden expansion of the gaps atop the overall standings, while he reiterated his dominance by dropping all his rivals bar Pogacar on the haul up Los Machucos on Friday. On this evidence, he seems unlikely to be discommoded by the impending Asturian doubleheader, though he has not been to reconnoitre the stages.

Stage 15 brings the race to a summit finish at Santuario del Acebo and includes the ascents of the Puerto del Connio and Puerto del Pozo de las Mujeres Muertas, while Monday sees the peloton tackle a novel special category finale atop the Alto de la Cubilla.

“I don’t know the climbs, I didn’t ride the climbs before, it’s the first time for me. I just saw the profiles. I think there are two very hard days coming up, especially tomorrow, the final climb is very difficult,” said Roglic, who anticipates that aggression will not be limited to the final climbs.

“For sure they will attack from the beginning. From the beginning, it will be a full gas race. I have to be ready for that, with the whole team. We’ll try to do our best.”