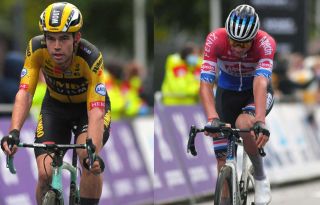 It's a miracle that it hasn't happened earlier, but the thrilling finale of Gent-Wevelgem uncovered the deep rivalry between life-long competitors Wout van Aert (Jumbo-Visma) and Mathieu van der Poel (Alpecin-Fenix). In a tactical finale, the duo ended up eyeing each other and finishing at the back of the nine-man group that fought for the victory in Wevelgem.

For the first time in their long rivalry, Van Aert was unable to hide his annoyance shortly after the race, and blamed Van der Poel for marking him and preferring to see him lose, rather than having a chance to win himself.

"It was a hard race and, as predicted, a group managed to ride away on the Kemmelberg. It's too bad, though, that I didn't win because my legs were feeling great. It's a missed chance," Van Aert said.

When asked if he felt like everybody marked his moves, Van Aert pointed specifically at Van der Poel: "Actually, there was only one rider who was really targeting me. Apparently, he preferred to see me lose rather than making a chance to win the race himself."

Van der Poel was quick to respond that he found Van Aert's words a little shallow as he was racing to win, as always.

"It's a weird reaction from Wout. He's one of the best riders in the front group, and if he goes, then I have to react, of course. If I didn't do that, my team would ask me why I didn't react when he went. It's a bit shallow to say I raced to make him lose because I always ride to win the race," Van der Poel told Sporza.

One week ahead of the last major one-day race of the Northern Classics, the Tour of Flanders, the small war of words between these two titans will surely be a main topic in the build-up to the Ronde.

Over the past 10 years, Van der Poel and Van Aert have raced each other countless times, and any race incidents were always waved away by showing mutual respect. The two have been racing each other in cyclo-cross since the junior category, while on the road, the duo already showed from 2016 on that they were the new kids on the block. Van der Poel has won Dwars door Vlaanderen, Brabantse Pijl and, unforgettably, the Amstel Gold Race in 2019. Van Aert has had stellar success on the road so far, winning Milan-San Remo, Strade Bianche, and three stages at the Tour de France.

At Gent-Wevelgem on Sunday, it was Van der Poel who opened the dispute between the favourites with a fierce acceleration on the plugstreets, 70km from the finish line, pulling away a group of nine, including eventual winner Mads Pedersen (Trek-Segafredo). Van Aert followed suit with a fierce acceleration during the second ascent of the Kemmelberg with 50km to go, and was marked by last year's Tour of Flanders winner Alberto Bettiol (EF Pro Cycling), eventual runner-up Florian Sénéchal (Deceuninck-QuickStep) and Van der Poel. A few more riders bridged up, and the chase group co-operated well until reaching the final ascent of the Kemmelberg, 30km from the finish line.

However, late in the race, as attacks started flying, with Bettiol often being the first to move, Van Aert closed a gap back down with five kilometres to go and then continued solo. Who would mark the top favourite's move? It was Van der Poel who brought everybody back to the Belgian's wheel in a long pursuit.

Once Van Aert was caught, Groupama-FDJ's Stefan Küng attacked, and once again Van Aert closed the gap to the Swiss time-trial specialist, with Sénéchal and Bettiol bridging up as well, making a strong four-man group with 3.5km to go. The other riders watched each other, and Van der Poel ended up chasing the four men back down, with Trentin closing the final metres.

The poker game continued, and at the 2km banner, Bettiol accelerated away with Matteo Trentin (CCC) and Sénéchal. Van Aert was the first to react, but John Degenkolb (Lotto-Soudal) and Van der Poel refused to help chase. Pedersen then blasted away towards the leaders and the eventual victory, while Van Aert and Van der Poel kept each other in check. A final move from Van Aert under the red banner in the final kilometre was marked by Van der Poel, and from there, Van Aert marked Van der Poel, while Degenkolb, Küng and Yves Lampaert (Deceuninck-QuickStep) rode away. Van Aert outsprinted Van der Poel for eighth place.

"I think [Van der Poel] forgot that I've already won quite a few times, so I had the option to play a bit of poker," Van Aert said. "Now we both end up empty-handed.

"I rode to win the race, but didn't get any freedom. I had my chance if it came down to a sprint. I knew the attacks would keep flying, but I can't keep reacting to every move, and I always found the same rider on my wheel. It's his right to act like this, but now we both have nothing.

"It's clear that I'm ready for the Tour of Flanders, but Gent-Wevelgem would have been nice on the palmarès, too. I've won a lot of nice races this year. It allowed me to play poker a bit in order to win the race, but today that didn't work out well."

In a separate interview, Van der Poel said that he knew it would be a tactical race in the final kilometres, and that he wasn't planning to react to every move.

"The group was too large to ride to the finish just like that, so you knew there would be attacks. It's a gamble game from there. There were a few riders I had to keep an eye on," Van der Poel said. "Obviously, Wout was one of the fastest riders in the group, but also Degenkolb and Trentin. I knew Pedersen was one of them, too, but he can play poker a bit more when groups are going."

The Dutch ace explained that he emptied himself to bring back Van Aert at 4km from the finish line: "I used my sprint to get the group of four riders in the final kilometres [Van Aert, Küng, Bettiol and Sénéchal]. It was a gamble. It was a matter of doing that effort or not having a chance for the victory at all. From there, I had nothing left in the tank. I was on my limit when the decisive move went."

After hearing Van Aert's remarks, Van der Poel came back from the Alpecin-Fenix team bus where he had taken a shower to set something straight in the Sporza studio near the finish line.

When asked by host Karl Vannieuwkerke about how he would rate himself compared to Van Aert, he said: "On the climbs, we were each other's match, I'd say. From there, I felt like he was giving a better impression. My best legs were long gone by then. If he goes alone, I have to chase him back down because otherwise, you can't win the race. In my opinion, you're still riding the race to win it at that point. I kept believing in it. When I closed the gap back down to the four leaders, I had nothing left in the tank, and when I looked back, I saw that the whole group was glued to my wheel. I hoped that I could have bridged up alone, but that wasn't the case. I was on the limit.

"I'm not blaming him [Van Aert] at all," Van Der Poel continued. "I did chase him back down a few times, but I wanted to win the race. I know that right now he's one of the strongest riders in the world. If I'm not chasing him back down, then I'm not going to win the race. That's bike racing. We were a close match for each other."

Asked if he would text Van Aert, Van der Poel said that he wasn't planning to do so.

"No, he's going to read about this, I suppose. I'm not mad at him, but I just wanted to offer my side of the story," Van der Poel said.

He added that he had no regrets about skipping the World Championships last month as he figured he wouldn't have made it into the first group over the top of the final climb, just like in Liège-Bastogne-Liège.

"Skipping the Worlds allowed me to do a training block in Livigno [Italy] to get me back to the level I needed to be ahead of these Classics," Van der Poel said.

When asked if he felt confident ahead of the Tour of Flanders, Van der Poel was his usual confident self: "You have to be confident. It will be a very hard race. It's a hard race to win. The passage on the Kemmelberg taught me that I'm going well. That's boosting my confidence."