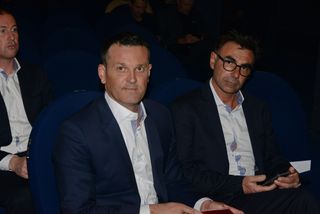 Last week the UCI unveiled a new-look calendar that includes dates for the Grand Tours, Monuments, and several other leading WorldTour events. The new programme lined out all three Grand Tours taking place within a 71-day window, with ASO having already announced that the Tour de France would take place between August 29 and September 20.

While the calendar was welcomed within the sport – for obvious reasons – it comes with a huge caveat, with all travel, mass gatherings, and sporting events ultimately dictated by national governmental policy.

"Things are getting better after the month we had in April. COVID-19 was creating trouble and cancelling races. The situation around the world was really bad and we only had small hopes for the cycling season. The news from ASO about a new date for the Tour de France was a start and now the UCI has given us more hope with the calendar," Vasseur told Cyclingnews.

"We can see that they're trying to put all the big races on the calendar. Of course, it's trickier than the one we're to but in the situation that we're all facing we all understand that it's not easy. We just hope that most of the races can happen but the plan still needs to be validated by national authorities."

Assuming that the level of COVID-19 patients remains at manageable numbers and lockdown measures can be eased Vasseur and his backroom staff will have the massive task of plotting race plans for their Cofidis riders.

The truncated calendar puts several WorldTour races on at the same time, and with obligations at national level races, Vasseur will have to find a balance. However, the Frenchman and former maillot jaune admitted that the WorldTour calendar remained his team's priority.

New recruit Guillaume Martin will likely target the Tour de France and the shortened version of the Vuelta a España, while fellow new arrival Elia Viviani may have to sacrifice his dreams of winning Milan-San Remo this year as the team looks to spread his form throughout a three-month period.

"On the day the calendar came out I sent it to all my riders. They're mostly very happy about the news," said Vasseur. "I also send it to the trainers and the sports directors but we need to go into detail on what we do next. We still need to know about some of the changes to some races but we know that it's going to be impossible to race both the Giro and the Tour.

"For someone like Guillaume Martin it might be possible to race the Tour and the Vuelta. Maybe he can do the Tour, La Flèche Wallonne, Liège-Bastogne-Liège and then the Vuelta. We need to talk about that.

"For Elia, and we've had a quick chat, I think we need to really decide on a plan because if we want to go for the win in Milan-San Remo it's clear that it's going to take a lot of hard work in June and July because you can't just arrive at the start of August without any races and go for the win. I'm also not sure that you can target Milan-San Remo, the Tour and then keep going at the same level for two or three months."

Vasseur is also hoping that the French federation can ease the pressure on his team by waiving the obligation on Cofidis to appear in national level races if there is a clash with WorldTour races. The French calendar has yet to be announced.

"We'll be a the Giro with one team, at Paris-Roubaix with another team and then we'll have a third team at the Vuelta. It's impossible for us to have a fourth roster at another race. Three races at the same time are hard enough for the riders and the staff.

"Normally, we have an obligation to participate in the WorldTour races and the French races but with this situation we're in, I'd like the UCI and the French Federation to give the possibility to switch and say that it's possible for us to skip some of the national races.

"We like to do races like the Tour du Limousin and GP Fourmies, but at the end of the day there needs to be a choice. The WorldTour races are going to be the priority."