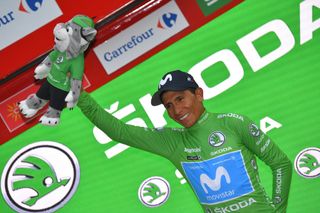 Nairo Quintana (Movistar)  says he is ready to do battle in Sunday's  Pyrenean stage at the 2019 Vuelta a Espana, with turning the tables on Primoz Roglic (Jumbo-Visma) topping his list of objectives.

Quintana is lying sixth overall, just 27 seconds down on Miguel Angel Lopez (Astana), the best-placed of the main favourites for Madrid and, as such, the current ‘virtual leader’ of the race.

However, after stage 7, Quintana had already tipped Roglic, just six seconds behind Lopez, as the real “virtual leader” of the Vuelta – thanks to the Slovenian’s  time trialling abilities, and with a 36 kilometre race against the clock in Pau looming fast on the  horizon.

Twenty-four hours later, after stage 8, as hundreds of Colombian fans cheered him to the rafters on the far side of the race barriers, Quintana once again effectively named Roglic as the rival to beat in the Pyrenees.

“We have to take advantage of the mountains to gain time on Roglic, because he’s sure to do better than us on the time trial,” Quintana told reporters . “So I hope I have a good day in Andorra.

“We’ll have to keep an eye on the weather. It could rain, but I don’t think that’ll be a problem. But it’s a very short, explosive stage, the kind where you can’t relax for a moment.”

Currently sixth overall and after a first week which started with a stage win, continued with an uneven day on Javalambre, but then saw Quintana resurface at Mas de La Costa on stage 7, Quintana has not had a particularly good track record in Andorra in recent years in the Vuelta. Last year in the Vuelta’s final weekend the Colombian suffered in the two Andorran stages, dropping from sixth to eighth overall.

Nor does he have good memories of Cortals d’Encamp. In 2015, having finished second in the Tour, Quintana lost nearly five minutes to stage winner Mikel Landa on the Andorran climb, although thanks to a strong third week, Quintana finally finished fourth overall.

However, unlike Valverde, who crossed the finishing line  on stage 8 complaining that he felt “frozen” and who headed straight to the Movistar team bus, Quintana said he had not suffered on Saturday despite the rainy weather in Catalonia.

“I got through today well without any problems, and tomorrow we’ll see what we can do,”  Quintana said as the Colombian fans, desperate for an opportunity for a photograph with their idol, all but tipped over the barrier behind which he was talking to reporters.

So a week after his victory in Calpe, who knows if Quintana will give his fanbase something to cheer about on Sunday in Andorra, too.