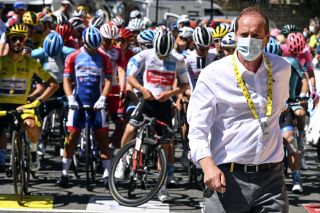 Tour de France director Christian Prudhomme returned to the race on Monday one week after testing positive for COVID-19 and having to self-isolate. According to Reuters and Le Parisien, Prudhomme was asymptomatic for the virus which has swept across the globe causing almost a million deaths and has subsequently tested negative, according to Lesoir.

Prudhomme left the race on the first rest day in La Rochelle after testing positive for the coronavirus. His lead car driver Gilles Maignan, considered to be in close contact with Prudhomme, was also forced to isolate, as did the French Prime Minister Jean Castex, who rode in the car with both men on the day before the positive test.

At the time, Castex praised the Tour for its security measures to protect against spreading the virus after celebrating the victory of Frenchman Nans Peters (AG2R La Mondiale) after stage 8.

On that stage, large crowds assembled on the Col de Peyresourde, most masked, but since then the race has banned spectators at the stage finishes making for a strangely quiet finale on the Grand Colombier on Sunday.

After being informed he was considered a close contact of a confirmed COVID-19 case (Prudhomme), Castex underwent a test that came back negative, but remained isolated for the week.

Castex announced on Friday that the country would no longer force positive individuals to isolate for 14 days, cutting the required quarantine period in half to seven days for asymptomatic individuals, reasoning that most people were not isolating for two weeks and that the shorter period might be met with a higher compliance level.

"We are most contagious in the first five days either after the first symptoms or after testing positive. After that, the level of contagiousness decreases significantly," French Health Minister Olivier Véran told France Inter.

Antoine Flahault, professor of public health and director of the Institute of Global Health at the University of Geneva, said on Twitter that less than 10 per cent of asymptomatic individuals are still contagious after five days.

Castex announced the new requirements even as the number of cases has spiked in France, in particular around Marseille, Bordeaux and greater Paris, bringing the average cases to 72 per 100,000. The percentage of positive tests has also gone up but the French government is still working to counteract the economic damage caused by widespread stay-at-home orders in the spring and wants to avoid another period of prolonged confinement.

Prudhomme and Maignan returned on Monday just as the Tour de France team bubble underwent its third round of COVID-19 testing, the results of which will be expected on Tuesday. Race leader Primoz Roglic assured that his team had tested negative even as the Jumbo-Visma team clarified they had not yet received their results.

Any rider testing positive will have an immediate second test to rule out a false positive, while any team with two confirmed positives will be required to exit the race.

So like that, Prudhomme will take over from temporary replacement François Lemarchand and be back waving the flag from the sunroof of the red lead vehicle when the Tour de France resumes with stage 16 at La Tour-du-Pin (Isère).