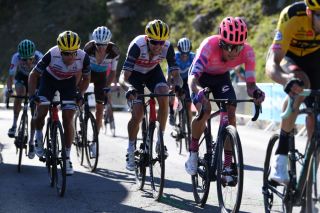 Trek-Segafredo’s Richie Porte (left) and Bauke Mollema (right) – pictured on stage 4 of the 2020 Tour de France – both lost 1:21 to a number of this year’s favourites as a result of the crosswinds on stage 7 (Image credit: Getty Images Sport)

With the Pyrenean stages starting with stage 8 on Saturday, and with the Alps still to come, Trek-Segafredo's Richie Porte and Bauke Mollema certainly haven't yet lost the Tour de France, but both riders losing 1:21 to race favourites such as Primoz Roglic (Jumbo-Visma), Groupama-FDJ's Thibaut Pinot and defending champion Egan Bernal (Ineos Grenadiers) as a result of the crosswinds on stage 7 on Friday has certainly made their task a lot harder.

As Ineos, Jumbo-Visma, Astana and Bora-Hansgrohe drove home their advantage after the splits happened around 40km from the finish of the day's 168km stage between Millau and Lavaur, Porte and Mollema – along with a number of other big-name riders, including Tadej Pogacar (UAE Team Emirates) and Mikel Landa (Bahrain McLaren) – set about at first trying to close the gap, and later settled into simply trying to limit their losses.

Mollema and Porte now both sit 1:34 down on race leader Adam Yates (Mitchelton-Scott-Scott), occupying 18th and 20th place, respectively, but are clearly far from ready to roll over yet.

"We got caught out, which is not ideal, but it's far from a huge disaster, knowing what's coming up in the next two weeks," said Porte, speaking on his team's Twitter feed on Friday evening.

Guardian angels: The domestiques who shone in the Tour de France crosswinds

"Of course, you don't want that to happen, but we are more into our terrain the next couple of days," said the Australian, with the climbing beginning in earnest this weekend.

"It was one short moment. The speed was high and there were two roundabouts, and it split in five places in front of me," added Mollema, offering a little more detail about what had happened. "There's not much more you can do when there are echelons.

"In the end, Richie and I were lucky that other teams also missed it, and [teammate] Toms Skujins helped out a lot, or it could have been worse," he said.

"I think we just made a mistake being too far back with 30 or 35 kilometres to go and, yeah, that's a pity. I think the legs were going okay, and you shouldn't lose time in a stage like this," Mollema admitted.

Indeed, the might of Ineos Grenadiers and what at least appears to be the even greater strength this year of Jumbo-Visma certainly helped to ensure that their leaders, at least, were in the right place at the right time, and that greater strength in depth usually proves to be key on the modern-day Tour.

In the past as Team Sky, and more recently Team Ineos and now Ineos Grenadiers, the British WorldTour team has tended to race close to the head of affairs, even on non-climbing stages like Friday's seventh stage.

Jumbo-Visma have now clearly also taken a leaf out of that book, and have ensured that Roglic and Tom Dumoulin have stayed close to the front of the race throughout most of the opening week of racing.

"We'll just have to get on with it and try to make amends a little bit tomorrow [Saturday]," said Porte. "And now that we are not so close on GC, hopefully we we'll have a little more breathing space in the next stages."