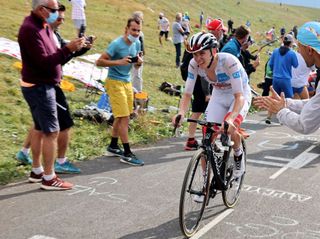 Tadej Pogačar (UAE Team Emirates) remains adamant that despite being dropped by race leader Primož Roglič (Jumbo-Visma) for the first time this year in the mountains he remains very much in the fight for the overall classification of the Tour de France.

Pogačar had predicted prior to Wednesday's stage 17 that while gains of a few seconds could be made, it would also be possible on the ultra-hard slopes of the Col de la Loze to lose up to half an hour.

As things turned out, the former prediction rather than the latter proved correct, with Pogačar losing a scant 15 seconds to Roglič, and his overall time loss on the Slovenian Tour leader stretching from 40 seconds to 57.

But with one tough Alpine stage remaining as well as the last time trial on Saturday, Pogačar was refusing to throw in the towel.

"I lost a few seconds on what was a really hard climb. I gave my best, the team gave their best and we got third place on the day to show for it. The Tour is still not over and anything can happen," he told reporters at the line.

"I can win or I can lose the podium. We'll try. Let's go with the flow and we'll see tomorrow and try our best."

Pogačar also said on Monday's  that even if he did not wear yellow  in Paris, he'd be happy ride onto the Champs-Élysées in the UAE Team Emirates jersey given the team's overall success.

But while yellow is clearly still possible, though increasingly unlikely, he believes that the option of a UAE Team jersey on Sunday's final podium is possible, given that he's not only leading the young rider classification, but also the king of the mountains ranking.

"I'm happy with my performance, it was a really tough day. Bahrain did a really fast tempo on the Madeleine and on Col de la Loze the race just exploded in the final few kilometres," Pogačar said, when asked to describe his day.

Then in the rollercoaster finale, Pogačar kept on closing the gap on Roglič on a road where the neverending succession of steep ramps and much easier segments made judging efforts extremely difficult. As a result, for the last two kilometres, every time Pogačar came within striking distance of his compatriot, his energy would suddenly drain away and he would then fall back again.

"Those  steep sections then flat sections, that was really hard for me today. Also it was at altitude – one of the hardest finals I've ever done," Pogačar reflected.

"In that hard finale I'm happy to not lose more time.We'll see what we can do but I think we can be happy with how we rode so far. We will fight to the end."