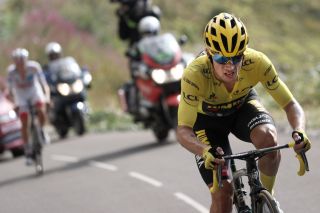 Primož Roglič (Jumbo-Visma) has confirmed that he and his teammates are continuing to use the dietary supplement ketones this season, for a second year, but has said it is difficult to know if they are having any effect.

The Slovenian’s comment came in a response to a question asked in a press conference shortly after finishing second on an exceptionally difficult Tour de France summit finish on the Col de Loze on stage 17 on Wednesday, where he managed to drop his closest GC pursuer, Tadej Pogačar (UAE Team Emirates), for the first time in the mountains in this year’s race.

Roglič gained 15 seconds on Pogačar, and, together with the time bonus available for second place, has now stretched his overall advantage from 40 seconds to 57.

As a result of his time gain and Pogačar’s difficulties, Roglič’s options on the overall victory in four days’ time have stepped up a level, although the final, complicated stage in the Alps on Thursday may yet provide some important surprises.

The dietary supplement ketones mentioned in the press conference are thought to improve recovery for endurance athletes. Jumbo-Visma manager Richard Plugge confirmed a year last July that his riders use the supplement in a report published in De Telegraaf.

Asked about the team’s ongoing use of them, Roglič said, “For [their] real effects, it’s hard to say, because it’s really hard to feel it. We’re at the end of the Tour, we’re all tired and we just want to do the best that’s possible. We’re just working towards that.”

As for the summit finish battle, Roglič managed to stay in contact with stage winner Miguel Angel López (Astana) when the Colombian opened up the final, critical, round of attacks with 3.5 kilometres to go.

He then shadowed teammate Sepp Kuss as, with Lopez now ahead, the Jumbo-Visma duo then dropped Pogačar.

Asked if he considered the race for the GC was now over, Roglič said, “No, I don’t think so. But this is one hard stage less. You can’t compare this climb with anything else and I’m just glad this one is behind us now.”

Several of Roglič's usual climbing support team – George Bennett, Wout van Aert and Robert Gesink – were shed on the climb thanks to Bahrain McLaren’s high speed in the first two thirds of the formidable 21-kilometre ascent. But Kuss stayed in place and played a critical role in the last part of the Loze, first going off the front with Lopez, then dropping back to pull Roglič away from Pogačar, after which Roglič himself went clear of his fellow Slovenian.

Asked about Kuss’ mixed role – first going on the attack, then shadowing Lopez, then dropping back to work for him – Roglič revealed that he and the American had talked a little just before “and I told him to go [attack] because in that case, the others have to follow and I still have a little more advantage on them. But on the other hand, I saw the other guys were struggling and I still had one guy there to help me. On this climb, every metre counts, every little bit of support matters.”

The question of Roglič’s time margin over Pogačar continues to be critical in the outcome of the remainder of the Tour de France, but while Roglič said he was increasingly satisfied with his gap on his Slovenian, “the time you have is never enough”.

“When you have something you want more,” he said, “every second you have is a second’s more advantage. I was pleased with my position, and now I am even more so.”

Meanwhile, as the Tour comes closer to its conclusion and a Roglič victory looks ever more certain, the roadsides are filling up with Slovenian supporters.

“The last few days have just been crazy,” Roglič said. “I see a lot of Slovenian flags, and they definitely give you that something extra you need, especially in the last week. I hope that they will be proud of us.”