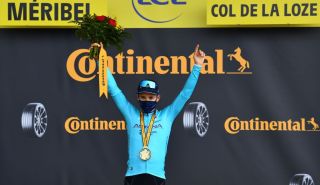 After the Giro d'Italia and then the Vuelta a España in 2018, two years later and following his fine solo win at stage 17 atop Col de la Loze in the Tour de France, Colombia's Miguel Angel Lopez (Astana) has taken a huge step towards a securing a third Grand Tour podium in his career.

López stormed away in the closing kilometres of the Col de la Loze as he followed up a move by Sepp Kuss (Jumbo-Visma) then found himself alone as the American dropped back to work for teammate Primož Roglič.

He held stubbornly onto his narrow advantage as Roglič tried and failed to close the gap, claiming an advantage of 15 seconds on the Slovenian at the finish.

As a result of his win, Lopez moved up a spot on GC and is now third overall at 1:26, nearly two minutes ahead of Richie Porte (Trek-Segafredo) who is fourth at 3:05. A third Grand Tour podium, then, is increasingly likely to be on the cards for the Colombian next Sunday - in his first Tour de France to boot.

"Maybe, it's possible," López argued, "I'm taking things as calmly as I can, but it's certainly possible.

"This is my first Tour, my initial objective was to get to Paris and finish, I've never done this before. But I'm feeling stronger and stronger and this final week looks good for me.

"This is the most important victory of my career, so it's inspiring, too."

As for how he could loosen both the Jumbo-Visma stranglehold on the mountain climbs and shake off Tadej Pogačar (UAE Team Emirates,) widely seen as the strongest climber in the race, Lopez argued that the higher altitude in the Alps favoured him considerably because "this is our natural terrain.

"Being at 2,000 metres is like we're at home and these longer, more difficult climbs, are the kind we Colombians like, too.

"Also, having my teammates there for so long with me gave me added confidence. Omar [Fraile] was there right the way through to the last climb, and that was unexpected and very motivating."

Lopez's chances of taking that final podium in the Grand Tours 'set' will hinge, most likely, on his time trial performance next Saturday, where he recognised his weakness at racing against the clock meant that he would be at a disadvantage to the other top contenders.

"In other circumstances, I'd say I'd need at least a minute's advantage," he reflected, "so we'll see what happens then."