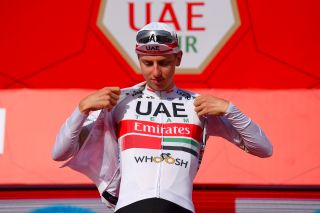 Tadej Pogačar has extended his contract with UAE Team Emirates until 2024, describing the next five years as "fundamental for the team and for my career".

Pogačar has already shown he is a future Grand Tour contender by finishing third at the 2019 Vuelta a España, where he also won three stages. He won the 2019 Tour of California and started the 2020 season with overall victory at the Volta a la Comunitat Valenciana, where he beat Alejandro Valverde on the first uphill finish.

He won a stage and finished second overall to Adam Yates (Mitchelton-Scott) at the UAE Tour before the UAE Team Emirates squad went into self-imposed quarantine after cases of the coronavirus emerged amongst other riders and staff.

Matxin: UAE Team Emirates was on an upward trajectory

Pogačar is expected to spearhead UAE Team Emirates if the 2020 season returns in the second half of the year, alongside sprinter Fernando Gaviria, Diego Ulissi, Fabio Aru, and Classics leader Alexander Kristoff. He will make his Tour de France debut in September if the races goes ahead.

"I am happy to continue my relationship with UAE Team Emirates. I turned professional here and I feel very comfortable with everyone," Pogačar said when UAE Team Emirates confirmed his contract extension.

"I believe in the team and I want to be part of this ambitious project.  The next five years will be fundamental for the team and for my career, with the hope that they will be fruitful years for both parties."

Experienced team manager Mauro Gianetti signed Pogačar as part of a new wave of young riders and as a major shake-up in team staff. Pogačar had already extended his contract until 2022 but Gianetti moved to fight off rivals teams by securing the Slovenian's presence with UAE Team Emirates until 2024.

The new contract is one of the longest in the WorldTour peloton, with Remco Evenepoel's deal at Deceuninck-QuickStep lasting until 2023 and Egan Bernal's deal with Team Ineos also finishing in 2023.

"There was a willingness on both sides to extend the contract once again," Gianetti said.

"Pogačar represents the type of rider that each team would like: talented with a strong will to learn every day. Values that will project him to the top of world cycling.

"Tadej won everyone over – not only with his results, but also with his attitude. The rest was just a matter of doing the paperwork."